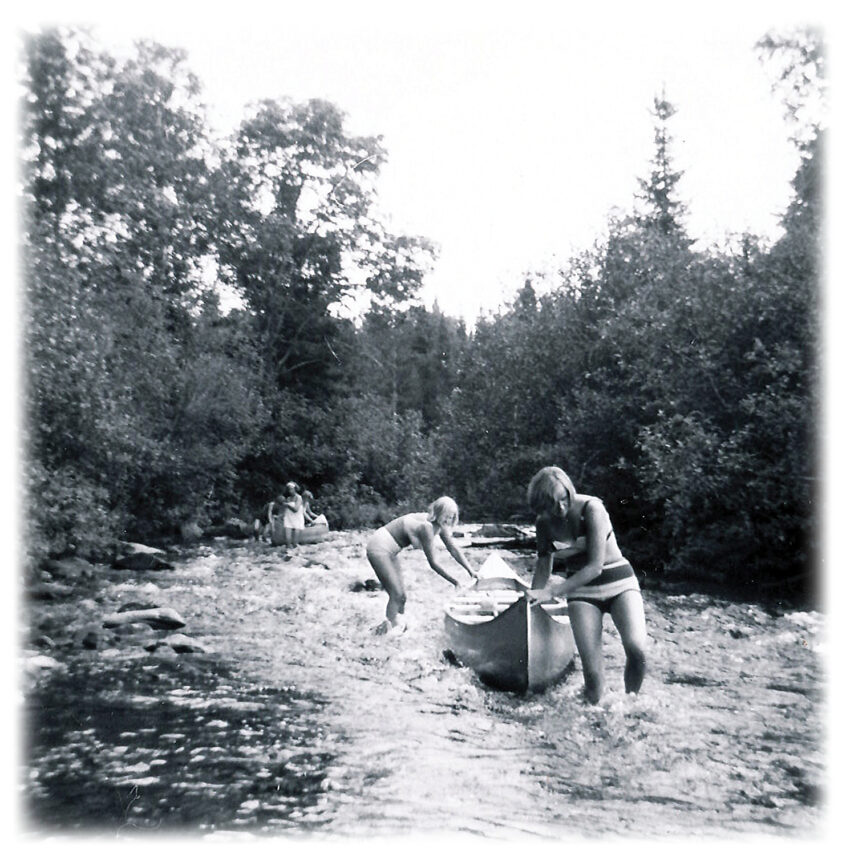 You should never view your challenges as a disadvantage. Instead, it’s important
for you to understand that your experience facing and overcoming adversity
is actually one of your biggest advantages.
~ Michelle Obama

After my freshman year in college I trained with Sodie to be a guide and lead trips myself. The training trip was in early June. That’s a time when the water is still ice cold so we could wash up but no real swimming could take place. It’s also a time when bears are hungrier than usual and some have cubs to feed as well. Extra caution is important.

The trip was more rigorous than any I had previously taken. For example, there were only six of us in three canoes. Two per canoe meant we were required to paddle all day. On previous trips we always had three in a canoe so one person could sit on the packs in the center and rest, enjoy the view, sleep, or whatever. Also, Sodie put a different one of us in charge for the day. That meant calculating how far we would go that day, deciding when to leave and when to stop for lunch, finding our next camp spot, reading the map – and reading it correctly. After all, every lake, island, rocky cliff, and forest looks pretty much the same.

On my day we were crossing lakes known as The Man Chain. The lakes’ names are This Man, That Man, Other Man, and No Man. Somewhere along the way, I took us on a wrong turn and we ended up at a dead end. We had to turn around and paddle back to our intended route. I figured out my mistake. One left turn too soon. Of course, this added four or five miles to our paddle for the day. Sodie was not happy with me. The others were not happy with me. I was not happy with me! Things were even quieter than usual as we retraced our route. When it was almost dark, we finally found our camp. There were no islands around so the camp spot for that night and the next was high on a rocky ridge. More work to do before the ‘day’ was done.

We took a day of rest when we were camped on the rocky ridge, Sodie taught us how to bake a pie in a reflector oven. We set it out to cool. Then we got into the canoes to go fishing for our dinner. Before we were even out of sight of our camp, a mother bear and two cubs headed for the pie. We made a lot of noise, but to no avail. We realized that the bears must have been watching us! We let them have the pie. We couldn’t have stopped them anyway.

Every lake seemed to have a pair of loons – and only one pair – that would call out in the evening and early morning. Whenever I hear them call as they migrate through the city each year, I think of having made it safely to a new camp, having dinner, and relaxing by the fire. Precious.

One of the other women, Jane, fell and broke her leg. We were far from medical help with no way to let anyone know. Sodie had to set it the best she could. Jane would have to tough it out until we got back to where she could get medical help. But it also meant that she could not paddle. We had to leave a canoe and some expendable gear – like the reflector oven – behind in an identifiable location so someone could pick it up on a future trip. So, three to a canoe again with an over-abundance of packs and other gear. And portages were an even bigger challenge than usual because we had to get Jane across.

One day we were crossing Saganaga, a very large lake. We were heading northwest as we began our return trip home. It was a clear day with a headwind. This meant two things. First, the wind combined with the size of the lake meant sizable waves. We started shipping the icy water. I was in the bow so I was soaked. Secondly, we were making very little progress because the wind was pushing us back. I was exhausted! How long could we do this?

Then, out of nowhere, we heard the sound of an motorboat engine. On Saganaga, like other lakes that sit on the borders of the wilderness, motorboats are allowed. Two men who were out fishing had seen us from afar and suspected we might be in trouble. They offered to tow us in to shore. We readily agreed. It was a miracle! Unexpected joy.

One of the men said they thought one person might be hurt. They got that right! They also thought there might be an old, white-haired lady in one of the canoes. That would be me with my very blond hair. I was 19.

From that trip I learned a lot about what can go wrong or be very difficult. It made me question whether I really was ready to be a guide in the wilderness. I took one group out that summer. It was a challenging experience for me. I was afraid someone would get hurt so I was overprotective and controlling. Of course, some members of the group resented this. It was not a fun week. I decided I would wait a year or two before leading any more groups.Then, instead, I went on to other summer adventures like working as a server in a resort hotel in Dixville Notch, NH, and leading groups of students in Europe.

For years after that, I continued to go camping with my small tent and solo canoe almost every weekend. My favorite camp spots were in our beautiful national forests. The camp grounds were ‘primitive’ – meaning, for example, that they had no electricity for RVs and their TVs or flush toilets and showers. Perfect for me: quiet and sparsely populated. I’m so very grateful for all of my wilderness immersion adventures.

Photo: ‘Portaging’ our canoes
Our gear had already been portaged
and was waiting for us.