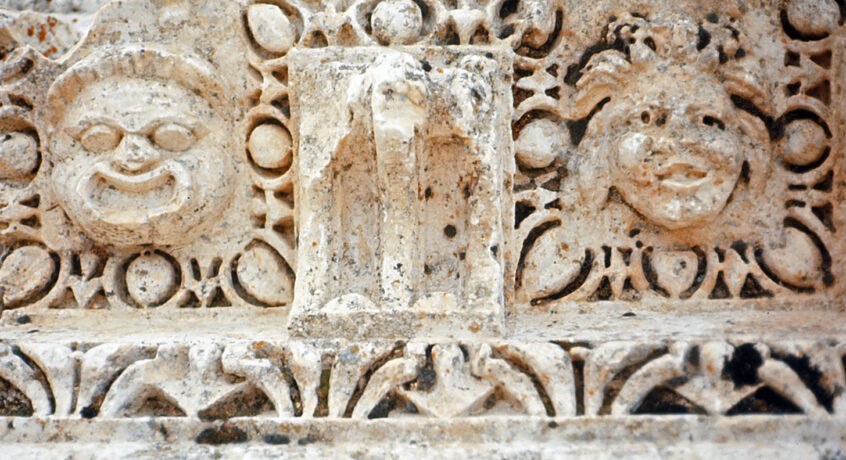 I took this photo fifty years ago at the magnificent ancient site of Ba’albek
in The Bekaa Valley of eastern Lebanon. It was built about 2000 years ago.

The comedy and tragedy masks of ancient Greece date back about 2500 years
Together, the two masks represent drama.

With boldness, passion, and great range, Zelensky embodies both masks.
He dances – in heels yet! – in a comedic parody of Beyoncé’s “Single Ladies”
and, on the other hand, he receives a standing ovation from British Parliament
following his serious and heartfelt pleas regarding the grave situation in Ukraine.
.
As of yesterday, March 15, 2022, latest U.N. estimates
are that at least 2 million people are displaced inside Ukraine and
more than 3 million refugees are sheltering in neighboring countries.
.
People living extraordinary ordinary lives until February 24,
just 21 days ago, now also find themselves embodying drama.
And I revel at the untold people who are nourishing and supporting them.
.
While locally this is a battle between Russia and The Ukraine,
globally the Ukrainians are standing not only for themselves and their land
but also for all of us the world over in protection of democracy over autocracy.
.
Amidst threats to local and global food security,
not to mention the nuclear threat,
we live in a world that is both beautiful and fragile!
.