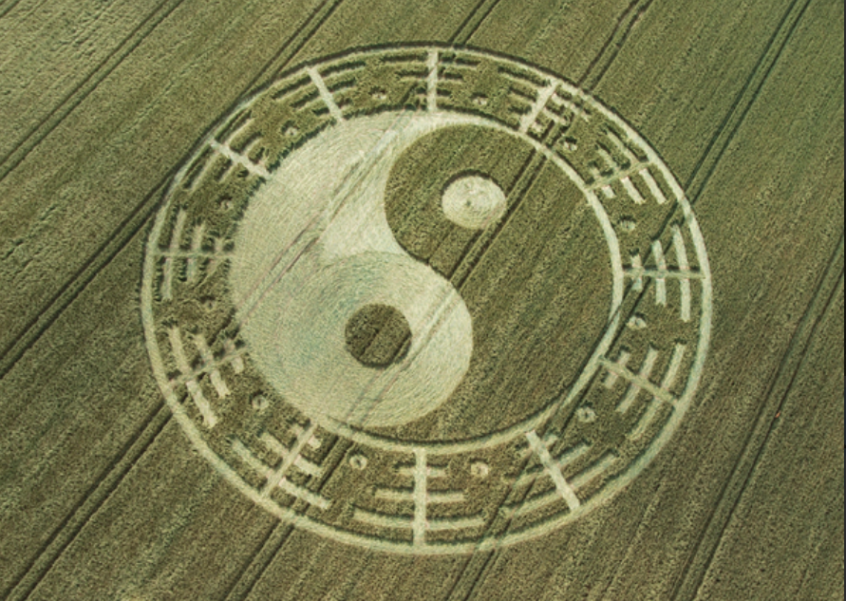 The yin-yang symbol and archetype represents the interconnectedness of the world.
There can be no positive without negative, no open without closed, no light without shadow.
This crop circle appeared in Somerset, England in 2007.

Stories of heroes and heroines often begin with
injustice and end with heroic acts of restoration.
~ David Richo

An arc is defined as the line that a story follows, from beginning to end. It is called an arc because of the rising, peak, and falling action. It runs from the beginning, through the middle, to the end of a story. Like the sun does every day with dawn, noon, and dusk.

An archetype is defined as a perfect or typical example of a person or thing. Archetypes are universal patterns of energy that reflect our collective human experience, transcending time, place, and even language. Stereotypes, on the other hand, are beliefs and assumptions that pigeonhole people or things with a particular characteristic.

At some point, as I have witnessed the hearings, what has come to my mind is the 12 Jungian Archetypes: The Innocent, Everyman, Hero, Outlaw, Explorer, Creator, Ruler, Magician, Lover, Caregiver, Jester, and Sage. While there may be more than two, I vividly see two of the archetypes in this story. They are the Hero and the Outlaw.

Some characteristics of the Hero archetype are:

As Committee Vice Chair Liz Cheney said of Cassidy Hutchinson in her closing remarks of the Jan 6 hearing on July 21, 2022: “She sat here alone, took the oath, and testified before millions of Americans. She knew all along that she would be attacked by President Trump, and by the 50, 60 and 70 year old men who hide themselves behind Executive Privilege. She has courage, and she did it anyway.”

In my opinion, Ms. Hutchinson’s courageous testimony broke open the floodgates in the Select Committee’s investigation. Think about it. Here we have a young woman with a career that is on an upward trajectory. Yet she is willing to potentially sacrifice everything she’s worked for to stand up for the truth, her integrity, and her values. As a result of her testimony, other witnesses have come forward.

And she’s not the only hero in this story. All of the witnesses are heroes. All have had to make a conscious choice either to come forth on their own or to affirmatively respond to a subpoena from the committee. And let us not overlook the members of the Select Committee itself: Heroes.

Liz Cheney stands out. In her own way and role, she has done the same thing as Cassidy. In an interview on CNN, she said that being on the Jan 6 Select Committee is “the single most important thing I have ever done professionally.” She is a hero who crosses partisan lines. And as evidence that goes beyond her role on the Jan 6 Select Committee, the NYT recently published an article entitled, “Liz Cheney’s Latest Fans: Democratic Donors.”

Cheney is a master at naming the elephant in the room directly and forcefully. As just one example, the NYT reported that in a June 29 speech she said, “At this moment, we are confronting a domestic threat that we have never faced before – and that is a former president who is attempting to unravel the foundations of our constitutional republic.” Speaking of which….

Some characteristics of the Outlaw archetype are being:

The Outlaw is driven by:

Trump incited The Proud Boys, The Oath Keepers, and other white-power groups and gave them permission but they were around long before he became POTUS. He leveraged them for his personal goal of maintaining power – albeit illegitimate.

I recently learned of Dr. Kathleen Belew, a professor of history at Northwestern University. Her concentration is the history of the present. Specifically, she is a global expert on the white-power movement. In it she sees great danger both for individuals and for the country as a whole. She has written a book entitled Bring the War Home: The White Power Movement and Paramilitary America.

In an interview on Amanpour and Company last week, a key question the interviewer asked her was, “How worried should we be about this [White Power] movement?” She responded:

“I think it is difficult to be too worried about this at present. In my view there are two major dangers posed to everyone in the United States right now from this [White Power] movement. One of them is that groups like the Oath Keepers and the Proud Boys become a sort of paramilitay shock force of the most extreme parts of the GOP and lead us toward a sort of authoritarian politics that is enforced by violent action, intimidation, and all of the things we would expect from reading the history of this movement. The other [danger] is that there will be a contingent of people in those groups like the Oath Keepers and the Proud Boys who are not at all interested in the United States or gaining power as part of the GOP but are actually interested in overthrowing the United States and creating their own ethno-state which is not at all interested in democracy or voting or freedom or any of the things I think of as patriotic.

“All of this has a deep history going back decades if not generations. This is a movement that operates simultaneously above ground where we can see it – which is the Proud Boys and the Oath Keepers – and also underground where it’s much more difficult to have an in-the-moment sense of what’s happening….So this is our opportunity to see behind the curtain [Jan 6 Select Committee Hearings]. And so far what we’re seeing is very alarming and should escalate everybody’s sense of urgency about this problem.”

LIVING HISTORY IN THE PRESENT

We are living in the midst of crisis and opportunity; we are living in the history of the precarious present where, by definition, the outcome is unknown as yet. One interesting piece about the hero archetype is that without choosing to face into adversity, we might never have heard of these heroes. That certainly is true of the witnesses. I had never heard of the acting leadership team of the DOJ. Or the women who worked in the White House. Or an election worker in Georgia. The list goes on. We owe them each and all a debt of gratitude! With more to come.

Where love rules, there is no will to power;
and where power predominates, there love is lacking.
The one is the shadow of the other.
~ Carl Jung