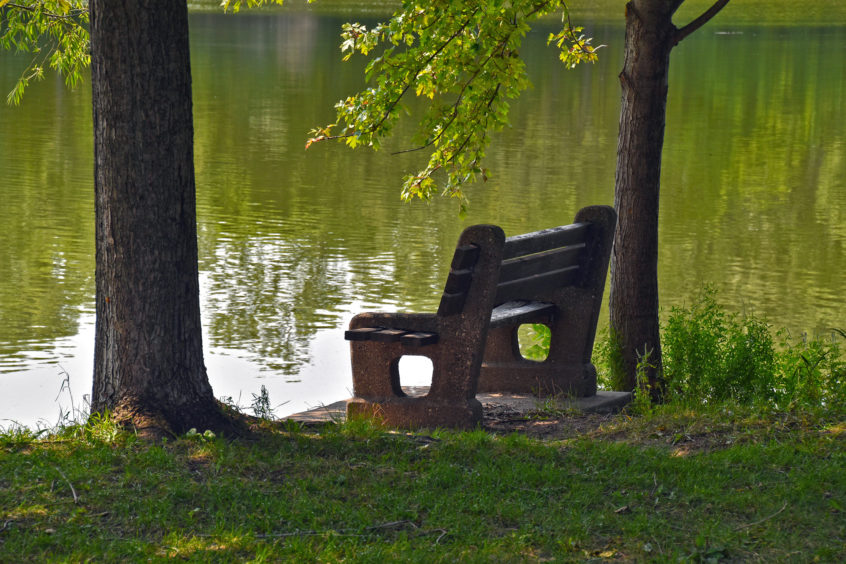 Every year I sit
On this bench and look beyond
Our reality.

Thirty years ago around this time of year, I read The Return of the Bird Tribes by Ken
Carey. The afterword is about another time of a major global compression wave
(constriction, contraction, fear, conflict) in human history:  World War II.
The excerpts below are about both the compression wave and the
initiation of a unique rarefaction wave (opening, expansion,
love, forgiveness) that occurred simultaneously.

I appear in sea, in wind, in soil, in starlight. In the sun I appear. I appear in mountains and desert rain.
I am the star and I am the stone. I am bird and fish, sky and sea. One and whole eternally, I come,
differentiating, multiplying, refracting like a ray of light through ten thousand water droplet prism
pearls suspended in earth’s highest sphere.Shining I come, to touch the surface of this matter world
in a splashing, multicolored chorus of light men and light women, created to bring beauty, love, order
and grace to this sacred dance of atomic form. Stardust. Frozen starlight.”

“I was one of a circle of luminous beings gathered. The thoughts that were shared were but part of our purpose. The very arrangement of our circle and its placement against the stars was itself designed to imprint upon us something more; so that later, if a time came when we found ourselves slumbering beneath a blanket of history, the very image of the Circle of the Faithful of the Stars might shake something loose in us and jolt us into wakefulness. You may remember. The location of our meeting was not upon the physical surface of the earth, but upon the higher frequencies of the spirit world – a location in the earth’s upper atmosphere above the 33rd degree of northern latitude. From where we gathered we could see below us the steady rotation of the Northern Hemisphere, the passage of its oceans, islands, continents.

“‘You are being invited,’ we were told, ‘to incarnate upon a world where illusion prevails. You who accept this invitation will soon find yourselves in a situation where the currents of fear have ruled [humans’] experience of separation. Your presence would do much to minimize the possible trauma that could occur with the changing of the age.’

“While it was being explained that what was happening on earth was like the change of a guard, suddenly the spinning planet, which until now had seemed unremarkable except for the gentle rocking of her seasons, was sprouting an enormous wound. An ominous gray circular cloud rolled toward us with the new day, obscuring the southern portion of the Japanese archipelago. We saw that it was supported by a black pillar, a turbulent inferno of awesome destruction. With each roll of the earth we could feel the raw human terror broadcast upward, rippling through our open hearts in waves of unbridled fear. Then suddenly, rolling toward us from the west, came another. A towering column of dark red, cloud-like substance surrounded an empty void that seemed as impossible in the midst of such chaos as the chaos itself.

“Into those moments we brought eternity. In them, we are still piecing together what justice requires. It is enough to say that on that day, we experienced hell. Yet even as we did, we knew what our response to the Great Spirit’s invitation would be. Yes, we would incarnate. Yes, the time had come.

“We have been seeded far and wide across the continents of the world. Yet, the task is not exclusively our own. All are invited to contribute their talents and ingenuity. [We are reminded] not be discouraged by the seemingly slow pace of change. The progression of awareness that precedes awakening is subtle and not always visible on the surface. There is no conflict of interest. There is simply new insight and a sense that it is time for the ages to progress.”

My parents met in the spring of 1945 when Dad was home on leave from the US Navy.
Six weeks later Mom took a Greyhound bus to San Francisco and they were married.
He then went back to his assignment on a destroyer in the Pacific. She took a
Greyhound back to MN. The war ended three months later on September 2.
It took Dad a bit of time to be discharged and to return home to MN.
Shortly after that my eternal essence joined the world of matter in
my mother’s womb and I was birthed into this human body on
August 26, one year after the bombs were dropped on Japan.

Sometimes I remember the truth of Love.
Other times, sadly, in fear, I forget.
~ Barbara