…to a physicist, light is more than just the light we see with our eyes. It is the whole spectrum of electromagnetic radiation,
of which the visible spectrum is just one tiny range of frequencies.  ~ Peter Russell, physicist and futurist

To achieve excellence, we must also consider and work with what is not apparent, with what cannot be seen.
We must journey into the complex world of subtle energies.  ~ Cyndi Dale, intuitive, healer, and author

This image is a physicist’s view of light. As in the quote above, “visible light is just a tiny range of frequencies” within a much larger range of invisible light frequencies. High energy radiation is more intense than lower radiation waves. An example of lower radiation is the longer radio waves. Radiation of lower energies is generally safer for life on earth than that of high energy radiation. Note that in the graphic, the continuums with arrows imply that there are more wavelengths, frequencies, and energies in both directions than is shown.

Radio waves can serve as an analogy to illustrate an underlying principle for better understanding the subtle energies of healing we can receive from gemstones – specifically, in this case, the Grounded Light designs. Radio waves are present all around us 24/7. However, if we don’t have the radio on, we don’t notice or care. Without turning the radio on, we could make an assumption that 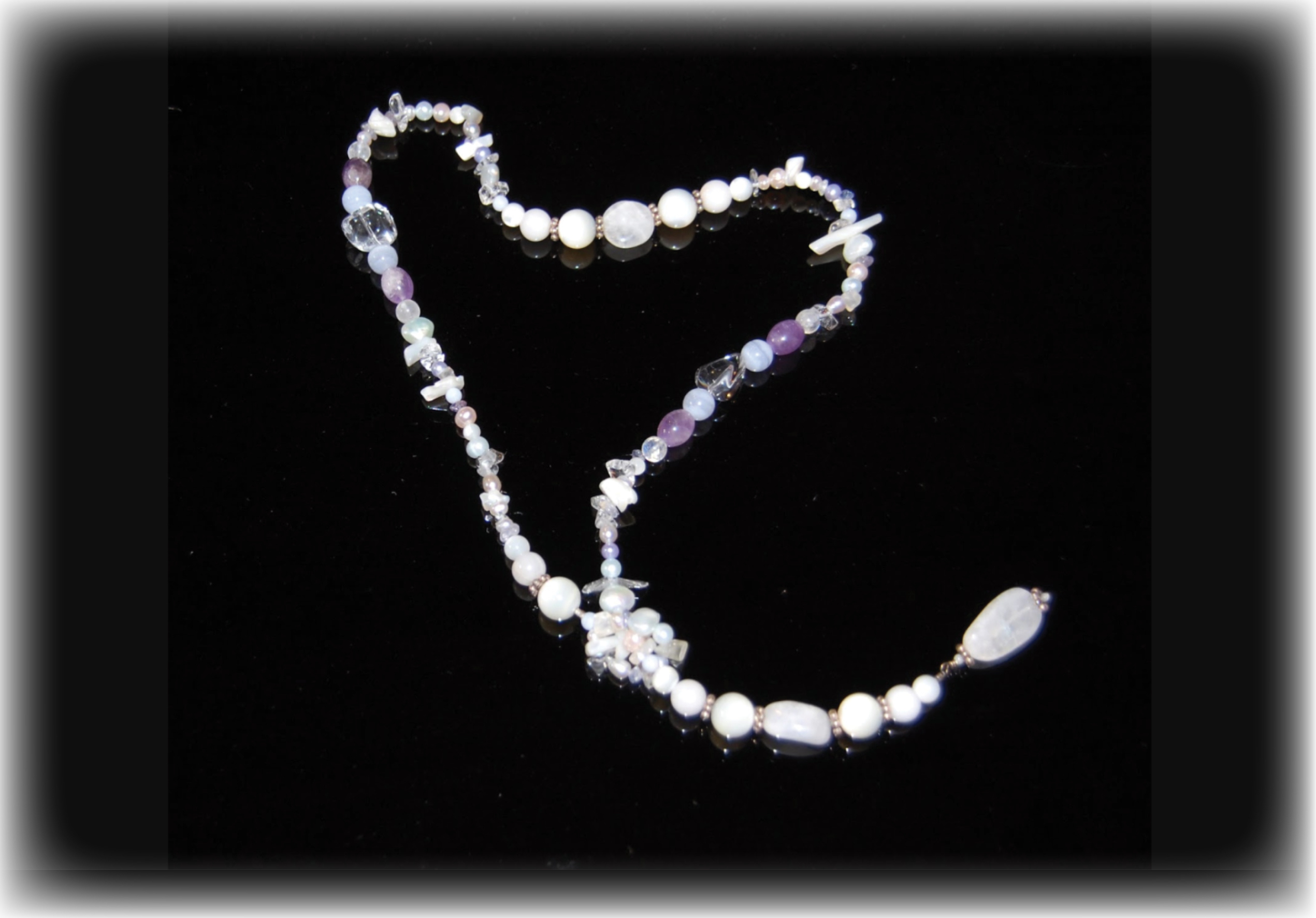 broadcasting doesn’t exist or, if it exists, it doesn’t broadcast for me. And the radio doesn’t turn itself on. So, the first step is to turn on the physical tool that transmits the waves: a radio receiver. Next, we have lots of options as to what frequency or station we want to hear. Once tuned to our choice, we receive new information as in the news or familiar information as in a beloved piece of music.

The Grounded Light designs have a similar process. They are a physical and visible way to invite the metaphysical and its invisible gifts. As the waves of light and energy are subtle, it’s possible not to notice or care. In that case, we can see, wear, and enjoy the gemstones as lovely physical jewelry and receive some energetic benefit. However, when we add choice and conscious intention, we can also take them much further. Like a radio, they are also tools that allow us to receive waves of information from the subtle realms of invisible light. Receptivity and relationship are fundamental. We can turn them on and then we can tune in to chosen frequencies that support our healing and growth. The potential they offer is all around us and available 24/7. This is especially true when they are placed in specific geometric patterns. One of the beauties of having them appear as jewelry is that they enhance and support both our physical as well as our spiritual well-being. They are literally a physical way to consciously hold the metaphysical. 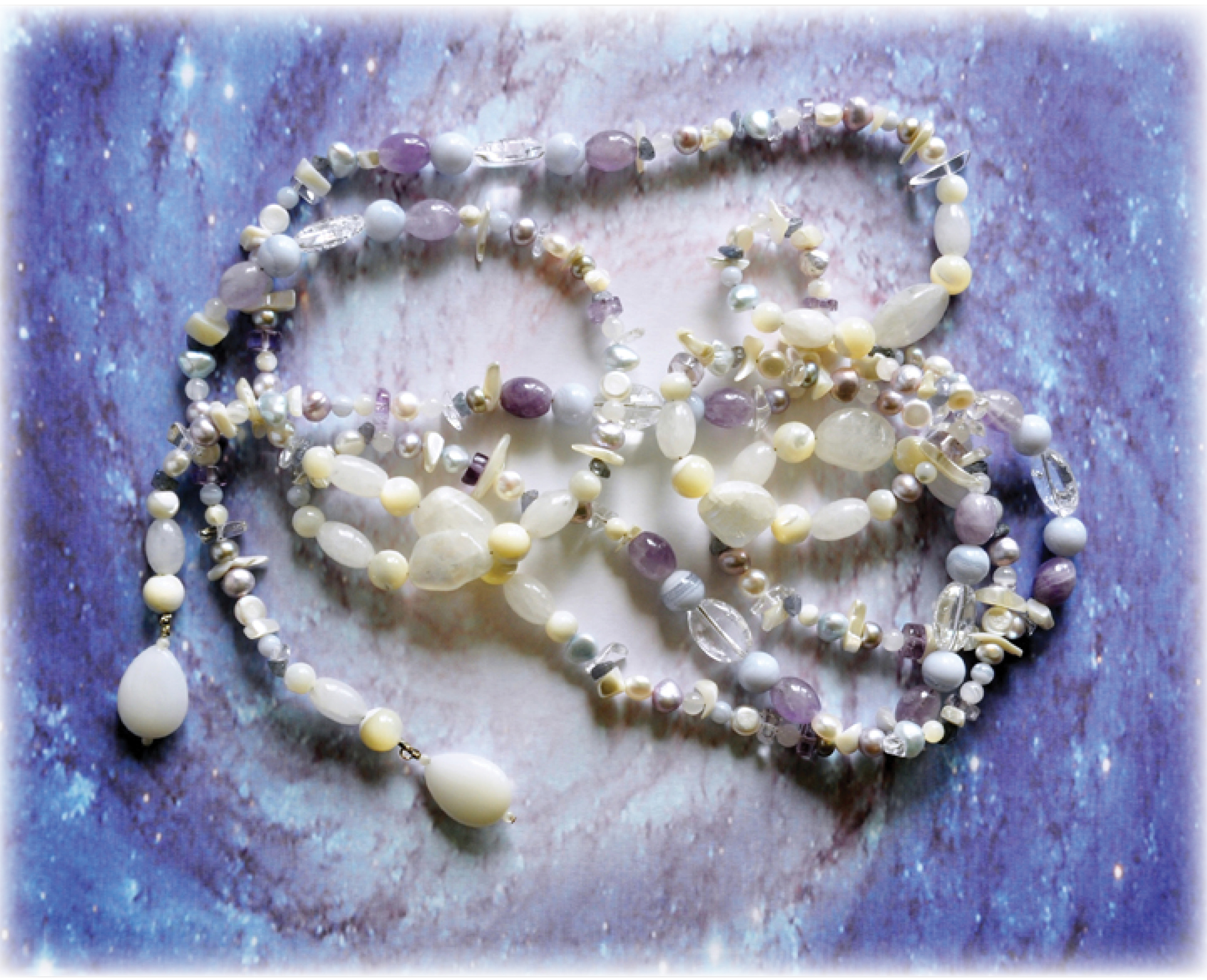 This necklace and lariat, Love and Compassion, belongs to the Celestial Rays collection. The 12 + 1 rays are uniquely designed as waves of light. They remind us that we are made of the same stuff as the stars! Like the sun and other stars, we also have the capacity to generate and radiate light! Each lariat has a different frequency of light energy and all of the frequencies are virtues composed of goodness and high vibrations.