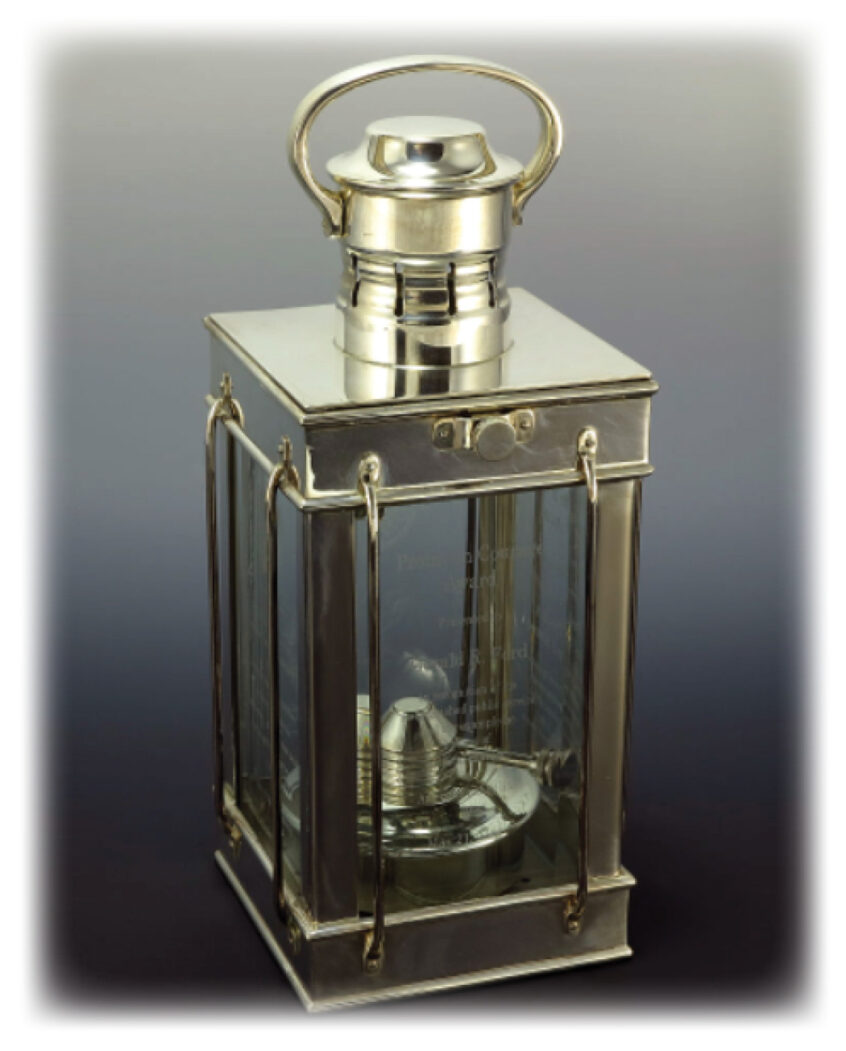 The JFK Profile in Courage Sterling Silver Tiffany Lantern
This specific lantern was given to Gerald Ford by Ted Kennedy in 2001.
.
.
For the scientist, the moment is the Nobel; for the journalist, the Pulitzer;
the actor, the Oscar. For those in government, it is the Kennedy.
~ former Governor of Connecticut, Lowell Weicker
Awarded the Kennedy Profile in Courage Award, 1991.

..
.For the first time, the John F. Kennedy Profile in Courage Award was given to five individuals. They each received their award for their brave, courageous contributions to defending democracy.

As with all those honored in the past, each honoree receives a lantern. A snippet from the website: “A lantern evokes the shared cultural symbols of light and truth. Light is the beacon of warning, of safety, of hope in the wilderness. It lights a dark path, illuminating the proper course.”

I assume most of us, if not all, have some sense of the integrity and courage that Volodymyr Zelenskyy and Liz Cheney fearlessly and continuously express in their own ways and roles. Nonetheless, here are a few extracted highlights from the JFK Library website.

Volodymyr Zelenskyy, President of Urkaine
“From the first moment of the invasion, Zelenskyy and his family became targets for assassination by Russian forces. In the face of this constant danger, Zelenskyy has led a courageous defense of democratic ideals and political independence. With candor and clarity, he has focused the eyes of the world on the existential threat facing Ukraine, and on the need for robust, uncompromising international engagement and cooperation to safeguard all democratic societies. His principled leadership has strengthened the resolve of Ukrainians and people around the globe to protect and defend the fragile human right of self-determination.”

Liz Cheney (R), Congress-Woman At-Large, Wyoming
“Prior to the election in 2020, Representative Liz Cheney was elected by her colleagues to be chair of the House Republican Conference, making her the third-ranking Republican in the U.S. House of Representatives, and the highest-ranking Republican woman in the history of the House. She has been one of the most conservative members within the Republican Conference. After the election, however, when President Trump falsely claimed that the election was stolen, she repeatedly called on the President to respect the rulings of the courts and his oath of office, and to publicly support the peaceful transfer of power. When the President instead rejected the lawful, certified outcome of the election, she broke with most in her party, urged fidelity to the Constitution, and stood her ground with honor and conviction….She now serves as the Vice Chair of the Select Committee investigating the January 6 insurrection, and remains a consistent and courageous voice in defense of democracy.”

I remember hearing bits and pieces about what was happening in Michigan and Arizona following the 2020 election. I learned a lot more when I read about the next two people who were honored.

Jocelyn Benson (D), Secretary of State, Michigan
“In December 2020, shortly after the presidential election, Michigan Secretary of State Jocelyn Benson was at home putting up Christmas decorations with her young son when armed protestors massed in front of her house demanding that Michigan’s presidential election result be reversed. Protesters called Benson a ‘traitor’ and a ‘criminal’ for defending the certification of Michigan’s accurate results, which favored Joe Biden. Benson, the state’s chief elections officer, did not waver….Throughout the 2020 election cycle, Benson repeatedly refused to back down from fulfilling the duties of her office, even as threats and harassment from then-President Trump and his allies grew increasingly aggressive.”

Russell “Rusty” Bowers, (R) House Speaker, Arizona
“Following the 2020 presidential election, Rusty Bowers, a pro-Trump Republican, resisted intense pressure from Trump and Rudy Giuliani and refused to go along with an illegal scheme to replace Arizona’s legal slate of electors with a false slate of electors who would elect Trump. ‘As a conservative Republican, I don’t like the results of the presidential election,’ Bowers said. ‘I voted for President Trump and worked hard to reelect him. But I cannot and will not entertain a suggestion that we violate current law to change the outcome of a certified election.’ For his decision of conscience, Bowers endured persistent harassment and intimidation tactics from Trump supporters.”

The fifth person is someone most, perhaps all, of us have never heard of before. She most directly represents the hardworking, unseen people who labor to keep our democracy running daily. In her acceptance speech she said something like, “I was just doing my job.”

Wandrea’ ArShaye Moss, Former Elections Dept employee, Fulton County, Georgia
“In December 2020, Wandrea’ ‘Shaye’ Moss, a full-time employee in the Fulton County Department of Registration & Elections since 2017, became the target of a vicious smear campaign by then-President Trump and his allies who were seeking to overturn the 2020 election….Trump and his supporters falsely accused Moss of processing fake ballots for Biden during the late-night hours of Election Day. After being identified and targeted by Trump and his followers, Moss received so many death threats and racist taunts that she was forced to change her appearance and go into hiding.”

The life of a nation is secure only while the nation
is honest, truthful, and virtuous. ~ Frederick Douglass