Decades ago I read a book…well, at least attempted to read…while in graduate school. Tertium Organum by P.D. Ouspensky was first published in 1920, years before the average person knew about quantum physics or relativity. Ouspensky suggests that because we live in a three-dimensional physical world, the fourth physical dimension, which is beyond our ability to perceive as a whole, becomes time.

Here’s an illustration: Imagine a reality where the beings can only experience two dimensions: forward and back and side to side. They cannot experience the third dimension of up and down. In other words, they live on a plane – like a piece of paper. Now imagine that a bicycle wheel is placed perpendicular to the plane with the hub at the level of the plane. Further, imagine that each spoke on the bicycle wheel is painted a different color and that the wheel moves at a fairly constant speed. The flatlanders can see each individual spoke as it passes through the plane. After a while, they notice that the blue spoke always follows the yellow spoke and precedes the red one. From observing the repeated and predictable patterns of the spokes as they pass through the plane, the flatlanders come to see recurring cycles and understand them as time. The whole wheel, however, is beyond their ability to perceive or comprehend. Thus, it seems that if we were six-dimensional beings, the seventh dimension would appear to be time; that the next dimension beyond our physical abilities to perceive is observed as linear time. 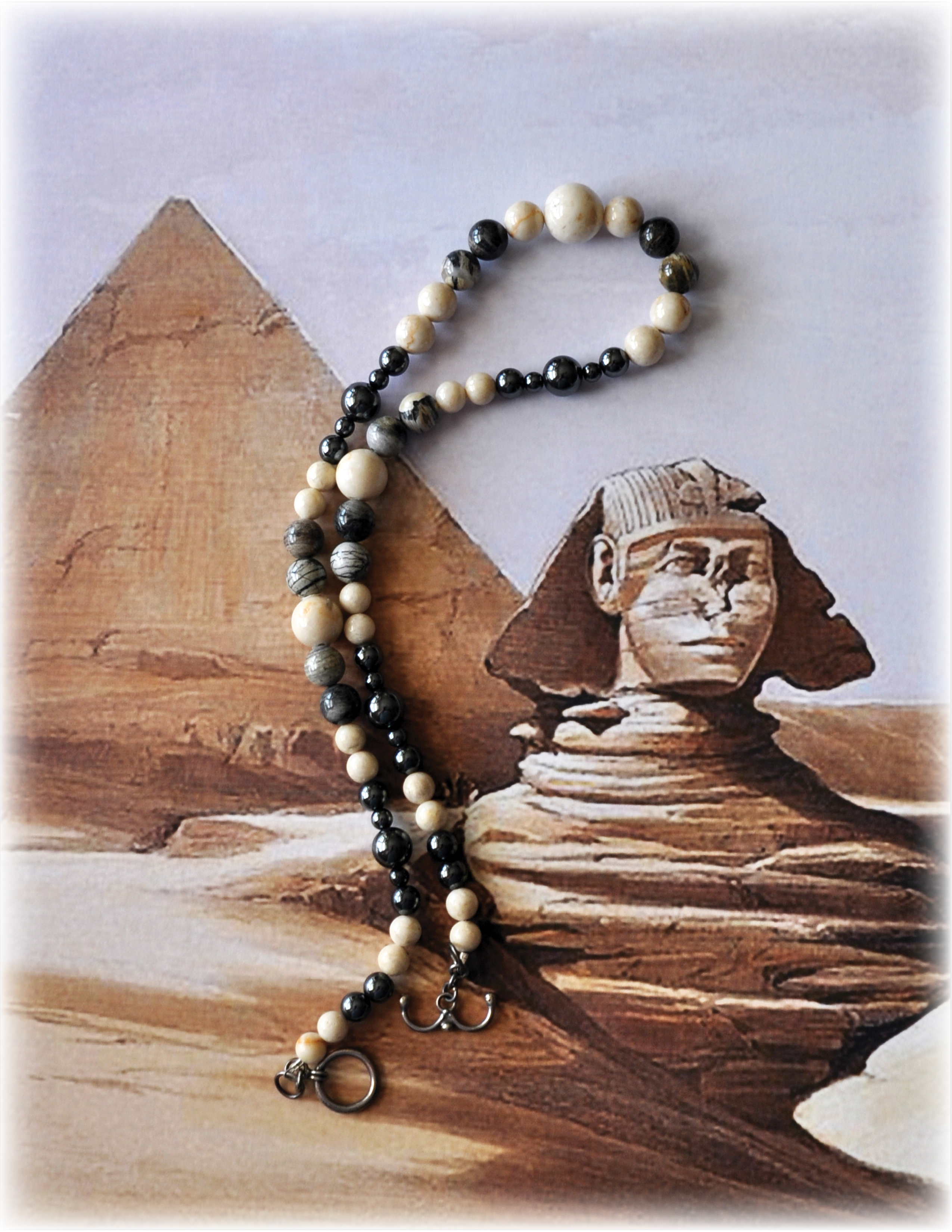 Another slightly different example: if I could put my five fingertips on the plane, the flatlanders would see them as five independent entities. They would be unable to comprehend how the tips are connected to each other by my hand; how they are part of a larger whole.

So…our three-dimensional concepts of time and space are also based on predictable, recurring patterns that we can see and measure: The sun rises and sets each day, the moon waxes and wanes each month, the seasons pass each year….
~~~~~~
For now, one more thought on the nature of linear time: Ouspensky points out that even as we may think we are living in the present, that present has already become the past. We can never quite catch the present because it’s gone and we are in a new present that was the future a moment ago. It’s a koan: “a paradoxical…riddle used in Zen Buddhism to demonstrate the inadequacy of logical reasoning and to provoke enlightenment.”

This necklace, another one of the 44 StoneCircles, is named Presents of Mind. It is designed to support you in coming to deeply understand how to remove limitations, both conscious and unconscious, that your mind has created. Its sacred place is with the pyramids and the sphinx of Giza, Egypt. The stones are silver leaf jasper, hematite, and riverstone.

Read more of Presents of Mind’s story including the significance of the stones’ attributes, the colors, numbers, and the geometry that are built into the design. It emerged in 2002.

Design and photo by Barbara on a public domain image of Giza.