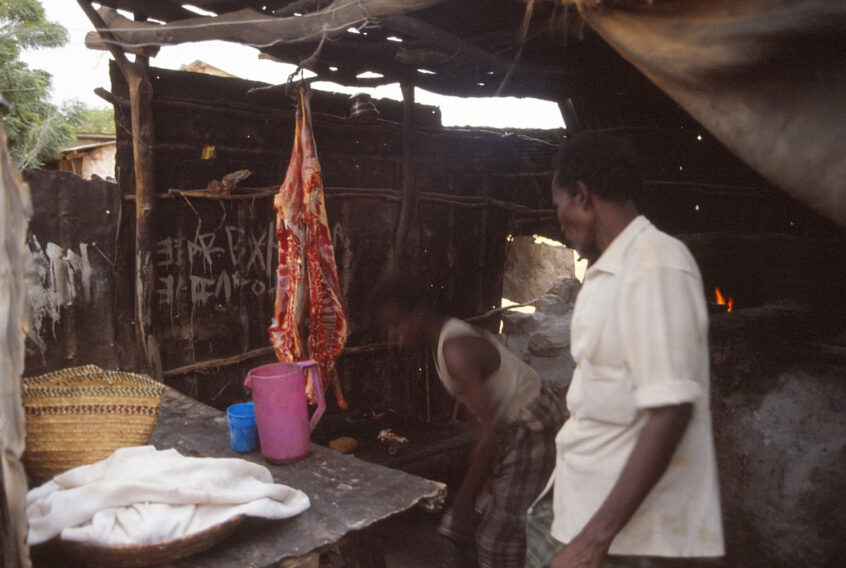 We thank thee for this food.
Feed our souls on the bread of life
and help us to do our part
in kind words and loving deeds.
~ Author Unknown
.
.
In the story, Being At Home, from a few weeks ago, I mentioned that the sun set rather suddenly at about 6:00 pm. Well, it also rose rather suddenly at about 6:00 am. I had a sweet sleep in my hammock. And now I could actually see some of what I only heard last night. A rooster crowing, people talking as they walked to and from the well, more onions frying….
.
We decided to walk to a nearby ‘restaurant’. The dining area was one table only slightly reminiscent of a picnic table. And then there was the ‘kitchen’. It consisted of rough wood and correlated metal walls and a tarp overhead. A freshly slaughtered animal hung from a rafter. Two people were cooking over an open fire. And there was a bucket of tepid water they used to rinse off the metal plates used by the people before us.
.
There was no menu. They merely cut off pieces of meat and put them on the fire. I was handed a plate of liver with sautéed onions. I hadn’t had liver in years but had enjoyed it when it came from animals slaughtered on my grandparents’ farm. I was definitely hungry in that moment but wondered about, among other things, food safety.
.
Before going to Somalia, I met with my doctor and asked about how best to stay healthy given I might be far from doctors at times. Without a moment’s hesitation, he said, “Pray over your food before you eat. It’s fuel. Ask that it be put to the best use possible as you do your work.”
.
When I was growing up we always said Grace before meals. It was a given. But somewhere along the way after I moved to the dorm in college, that family ritual evaporated somehow. Now it had been proposed to me – by a doctor yet – that praying over my food was not only a way of giving thanks but also a way to stay healthy! Okay. So on that morning, I took the suggestion most seriously. And every day after that for the entire year I was in Somalia I prayed over my food – no matter what the food or what the circumstance. For the entire time I lived in Somalia I stayed physically healthy. Psychologically and emotionally, however, was another matter at times. Blessed be!
.
.
Photo by Barbara
Luuq, Somalia 1983