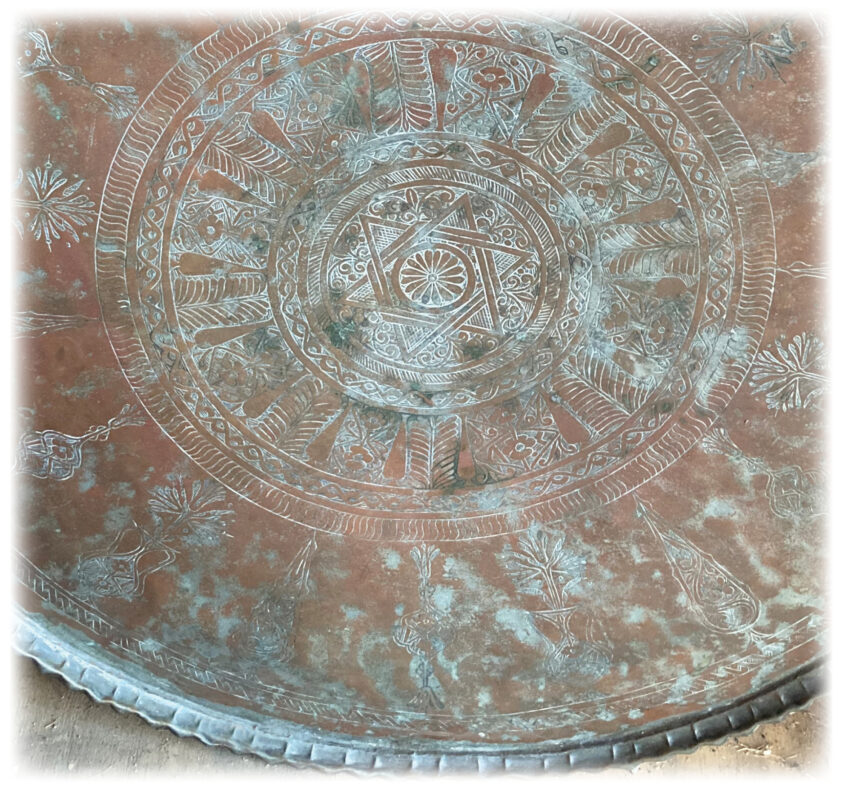 I bought this tray in the Al Madina Souk in Aleppo, Syria
.
Al Madina Souk in Aleppo, Syria, was largely destroyed during the Syrian civil war (2011-2016).
Stretching over 12 hectares [30 acres] and dating back to the 13th century, Aleppo’s souk
was the biggest in the world. It was classified a UNESCO World Heritage site in 1986.
It’s a rabbit warren of stone-wall alleyways and hidey-hole courtyards, brimming with
hurried shoppers and hawkers who push and shout their way along worn cobbled lanes.
Aleppo is one of the oldest continuously inhabited places on earth; historians claim the site
has been lived in for more than 8000 years. Its position at the cross-roads
from Europe, Asia and Africa made it a strategic hub for trade. ~ Getty Images
.
Our sole purpose in traveling to Aleppo was to shop. Of course, given my meager teaching salary, I had to be very judicious about what I chose to purchase. My single purchase was a ‘used’ copper tray. Meaning that it had really been used for the practical purpose of cooking communal meals as opposed to being a tray made for tourists. It is about four feet across. and black on the bottom from sitting on open fires. It has a hook on the back so it can be hung on a wall. I imagine it to be old – pre-Zionist – because of the six-pointed star at its center. A work of art!
.
Once in Aleppo my travel companions and I immersed ourselves in one of the largest and oldest indoor marketplaces in the world. In the Middle East they call it a ‘souk.’ This souk was more than 700 years old and, generally, stores with similar goods were near each other. So, for example, fabric stores would be together, stores selling jewelry were together. I bought the tray in the metal souk. The stores faced each other on cobblestone alleyways. The alleys were narrow yet wide enough to accommodate people, horses, donkeys, and motorbikes. The closest thing we have In the US is a suburban mall. However, this souk is much, much larger.
.
The market was mostly destroyed during the Syrian War between 2011 and 2016. And, as with Ukraine today, civilians were targeted then as well. I posted the following on facebook a few days ago: “I’m suffering at the moment. You see, I’ve become aware that I am deeply attached to the possibility that humanity as a whole can evolve. Not just some individuals and not others. But as a whole. I usually carry the long term view of evolution. However, at present, I am experiencing a moment of grief.” As I did during the Bosnian War, the Syrian Civil War, the Somali Civil War, The Sudanese Civil War….All places I have visited or lived over the years.
.
I received many deep and thoughtful responses to my post. Gratifying. A most recent one gives me solace. “In my own grief, I am reading Martín Prechtel’s book, The Smell of Rain on Dust. These words have helped: ‘The eloquence of our own affection for one another keeps the world healthy. Praise and the depth of our grief expressed for one another keeps the world in love. Love is health.’ Barbara, there is so much love in response to your post; to me, a measure of the power of your vulnerability… so desperately needed in the world. Thank you.”
.
War…huh…yeah
What is it good for?
Absolutely nothing….
.
War means tears to thousands of mother’s eyes,
When their sons gone to fight and lose their lives….
.
It ain’t nothing but a heartbreaker,
War. Friend only to the undertaker….
.
They say we must fight to keep our freedom,
But Lord knows there’s got to be a better way.
.
War…huh…yeah
What is it good for?
Absolutely nothing….
.
~ Excerpted lyrics from WAR by Edwin Starr
. 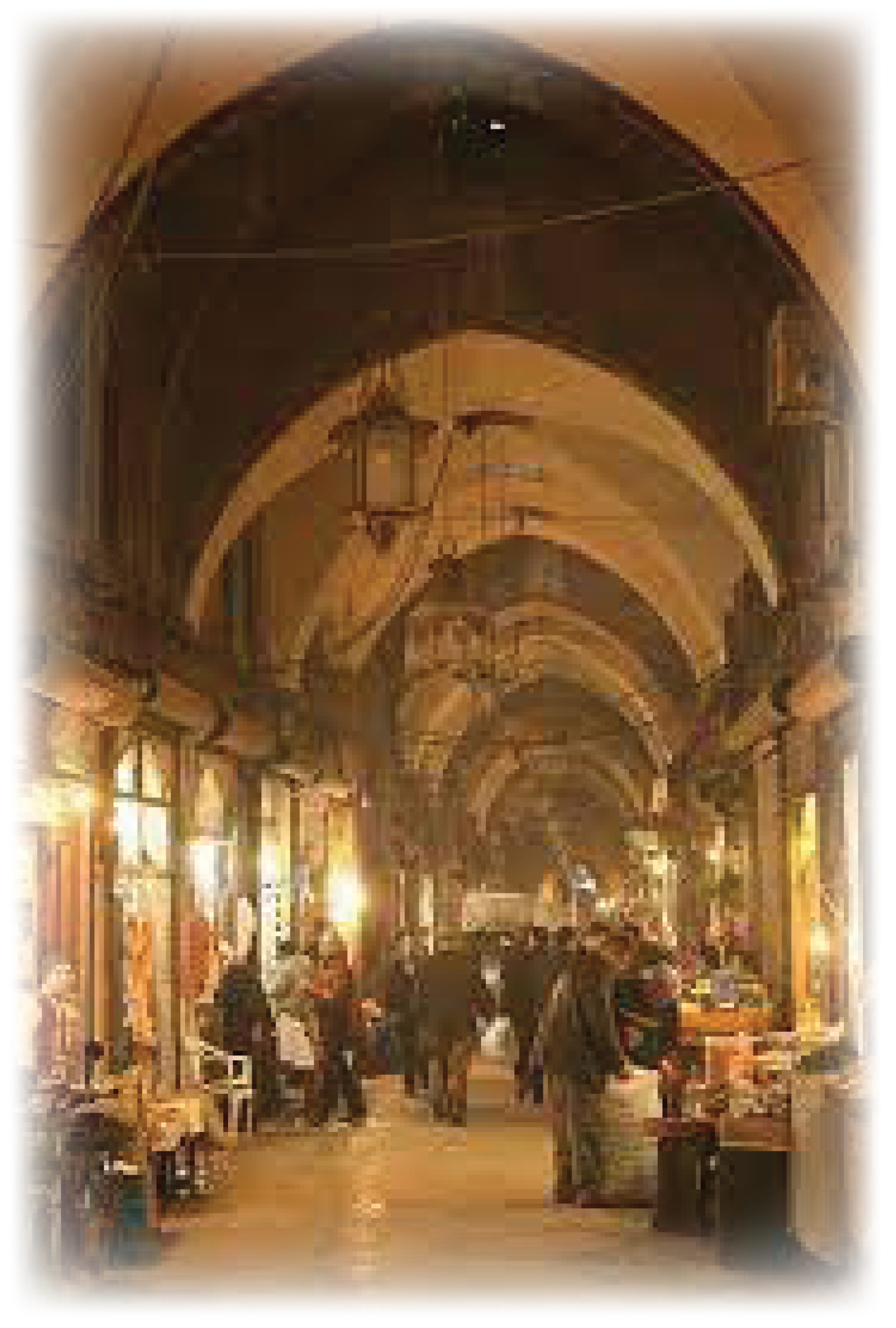 The Al Madina Souk in Aleppo before and after the Syrian War
. 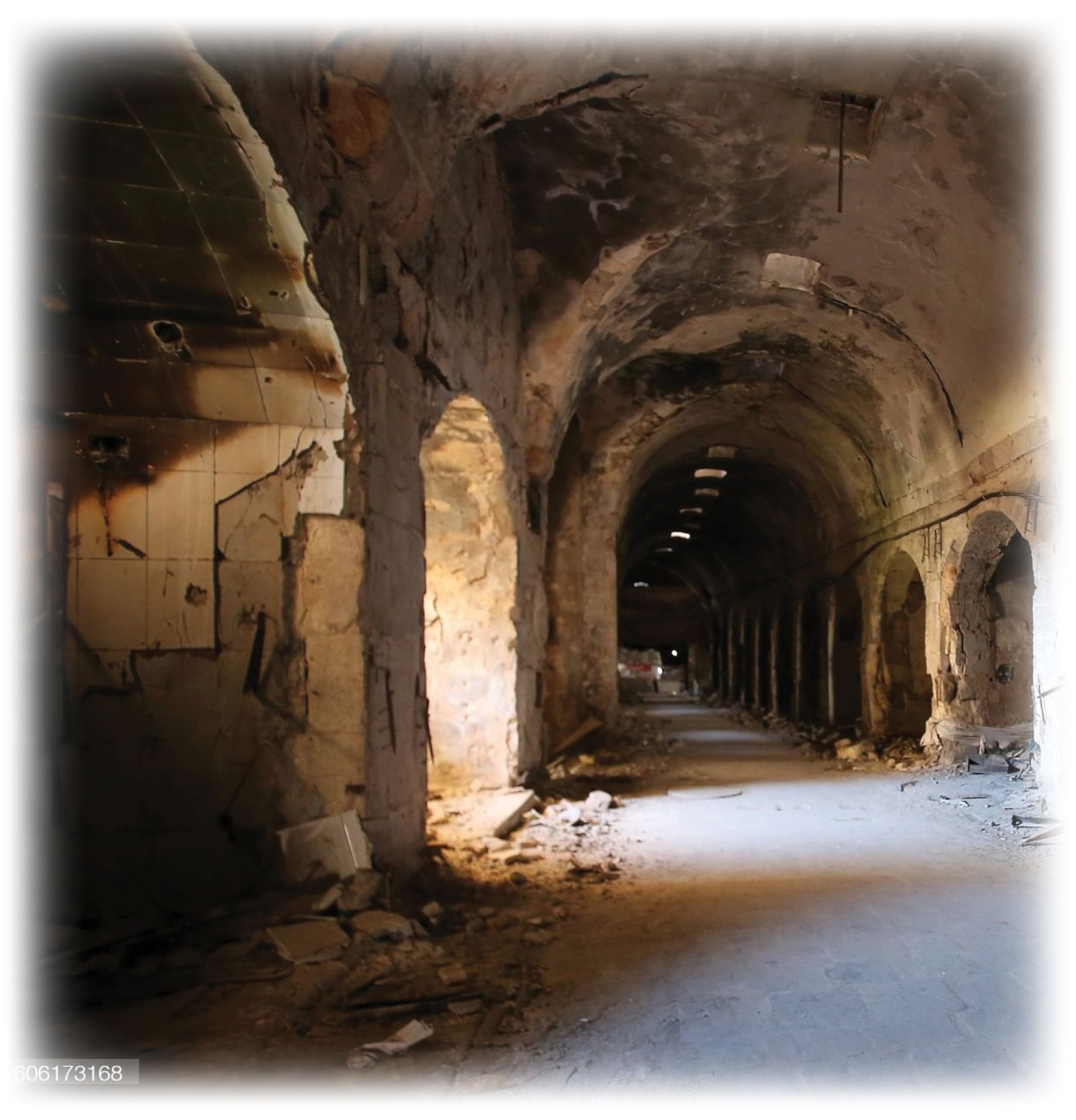 .
Photo of the tray taken on Barbara’s iPhone
Photos of the Al Madina Souk, Aleppo, Syria, are in the public domain