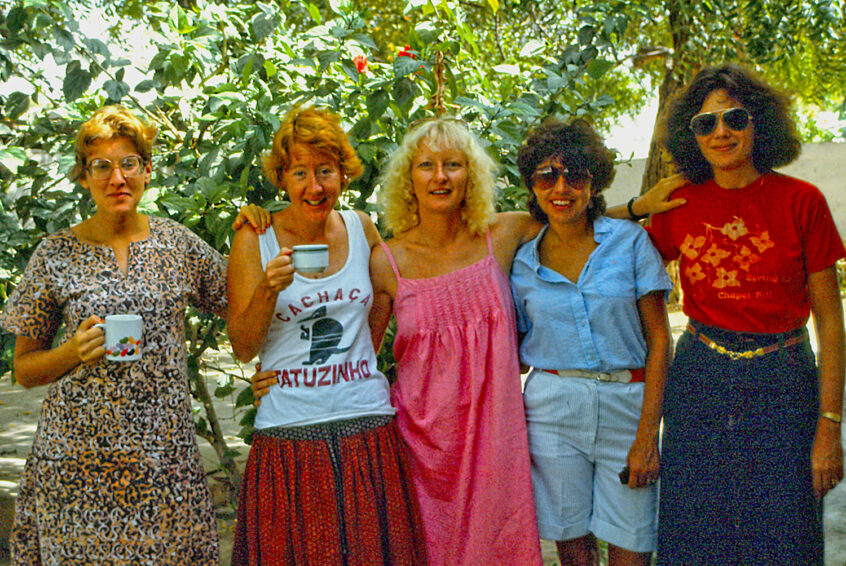 My relationships with my girlfriends brought a special lightness and sweetness to my life.
We are meeting in someone’s garden (with spouses) to embark on the stupidest field trip ever.
Scan of a 35mm slide

The Healing Power of Friendships

.
A stranger sees only what (s)he knows. ~ African proverb
.
I cannot even imagine where I would be today were it not for that handful of friends
who have given me a heart full of joy. Let’s face it, friends make life a lot more fun.
~ Charles R. Swindoll
…\
About a month into my time in Somalia, the director of the NGO in charge of food distribution for all of the refugee camps throughout Somalia and who had a long-standing affiliation with the US-based NGO I worked for invited me to his home for dinner. He told me that others would be joining as well and it would be a good chance for me to meet some people I hadn’t yet met. He suggested that I come early so we could talk.
.
When I arrived he and his wife were very busy cooking homemade paella with fresh seafood and sausage from the small Italian grocery. (Alitalia flew to Mogadishu twice a week and brought supplies like coffee and hard salami for the grocery.) Somali kitchens are often small and sparse with barely room for the two of them but he managed to squeeze in a chair for me.
.
“So how is it going?” he asked. I don’t remember what I responded but my guess is that it was probably some lament about someone who didn’t seem to value or respect me. Something like that. Whatever it was offered the perfect segue for him to be able to give me both feedback and coaching.
.
“This could change, but for now, your work on this project is an interlude and you’ll probably return to your consulting practice in the US. However, for most of us, this is a life-long career. For one thing, most of the people working here in the various NGOs know each other at least by reputation, if not personally. They’ve worked together for years and sometimes decades in places where there were concentrations of refugees; places like Indonesia, Thailand, Ethiopia, and Pakistan.
.
“You are not an outside consultant here; you’re inside a community. You know, you may have developed a wonderful reputation in your consulting business back home. I’m sure you have. However, that reputation is worth nothing here. You are an unknown quantity to people in this community. You are acting like people should value and respect you when they don’t even know you. You need to put in the work to develop relationships with people you work with and help them see how much you value and respect them. A little humility would go a long way, I expect.”
.
Cha-ching! That feedback changed everything for me in how I approached my work and world in Somalia. I stopped trying so hard to impress and decided to focus on learning more about and from the people around me – beginning with a dinner of fabulous paella and great new people to meet.
.
Virtually everyone at the table that evening became a friend of mine – some for life! One woman went from Somalia to Pakistan to DC to Fiji to Geneva. Her husband followed her in support of her career – not all that common at that time. (The two on our left in the photo below.) Another couple went from Somalia to Ethiopia. Sometime later I worked on a project with her in Ethiopia. They now live in DC. As for my host and coach, he and his wife moved on to Thailand. I had the good fortune to visit them there one Christmas.
.
In addition to those at the dinner, I am also still connected to several other people. An example is a most generous couple. Today he splits his time between his work in Kurdish Iraq and his native Hawaii where his wife, originally from India, has settled. A couple who worked in a camp in the south of Somalia came to Mogadishu fairly frequently and some of us visited them in Qoryoley. They went on to The Gambia where I visited them on my way home from completing a project in The Sudan. (On our right in the photo below.)
.
I’ve been musing about how it is that I still feel so deeply connected to people I met decades ago and only knew in person for a year – and less in most cases. These wonderful people raised me up out of the muck I had landed in when I first arrived in Somalia. And they continued to support me through one of the most difficult experiences of my life.
.
What a blessing. We went to the beach together on Fridays, cooked and ate great meals, ate fresh fish and mangoes at rustic outdoor seaside restaurants, we laughed, listened to each other, went fishing, collected shells, visited refugee camps, had parties. In short, the burden of my loneliness was greatly eased by them. I felt truly cared for. And I joined the community. The quote below says it all. I can never adequately pay them back. I can only “keep saying thank you, forever and sincerely, for as long as” I have a voice.
.
Maybe we must all give up trying to pay back the people in this world who sustain our lives.
In the end, maybe it’s wiser to surrender before the miraculous scope of human generosity
and to just keep saying thank you, forever and sincerely, for as long as we have voices.
~ Elizabeth Gilbert
.
. 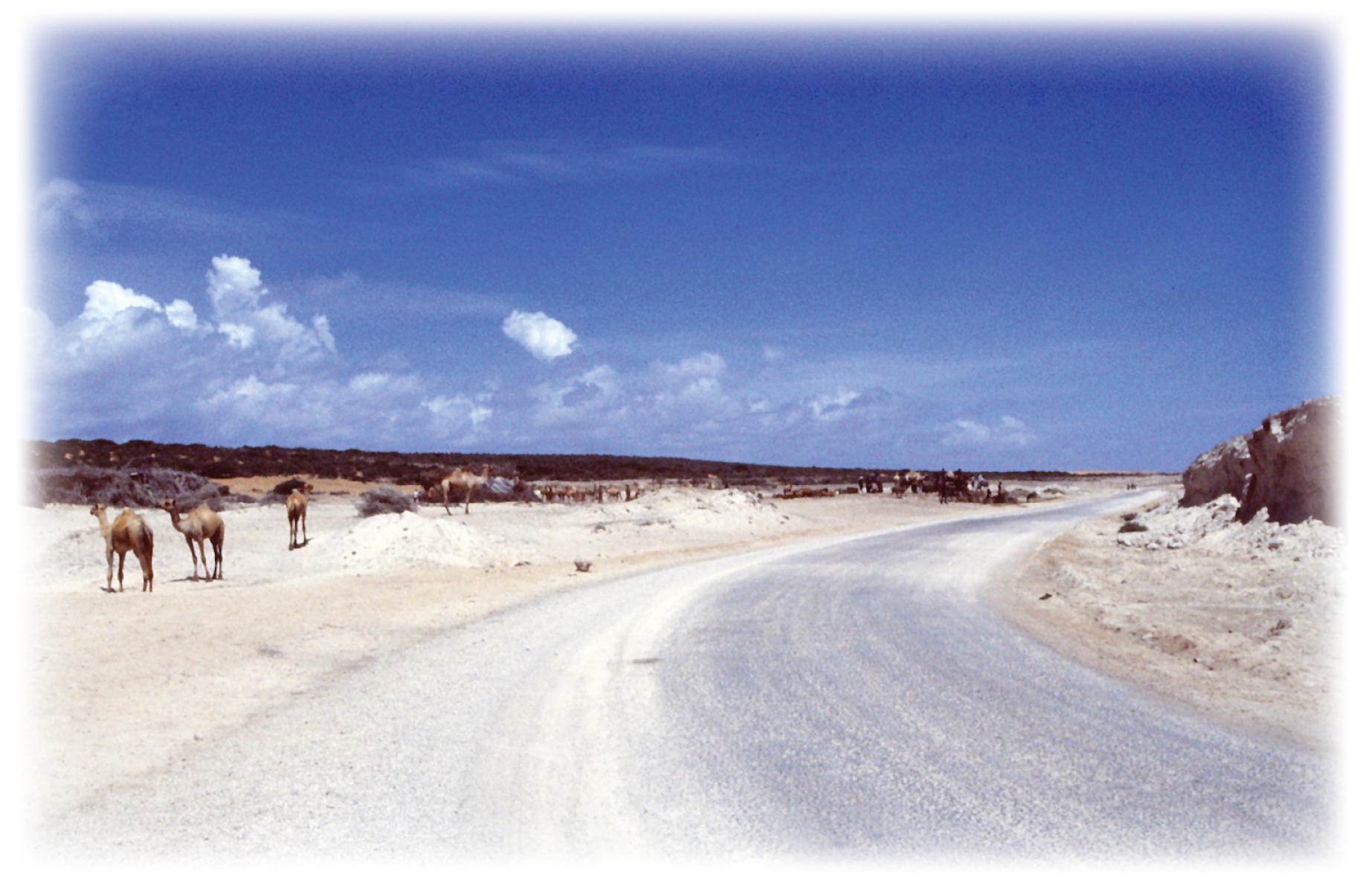 The road to the beach at Shark’s Bay. Memory says it was about a 1/2 hour drive.
Scan of aa 35mm slide.

Shark’s Bay on the Indian Ocean. No shade anywhere. A surprise at first but I got used to it.
Our vehicles are at the top of the dune. We’d freeze beer so we didn’t need to carry ice.
Scan of aa 35mm slide.