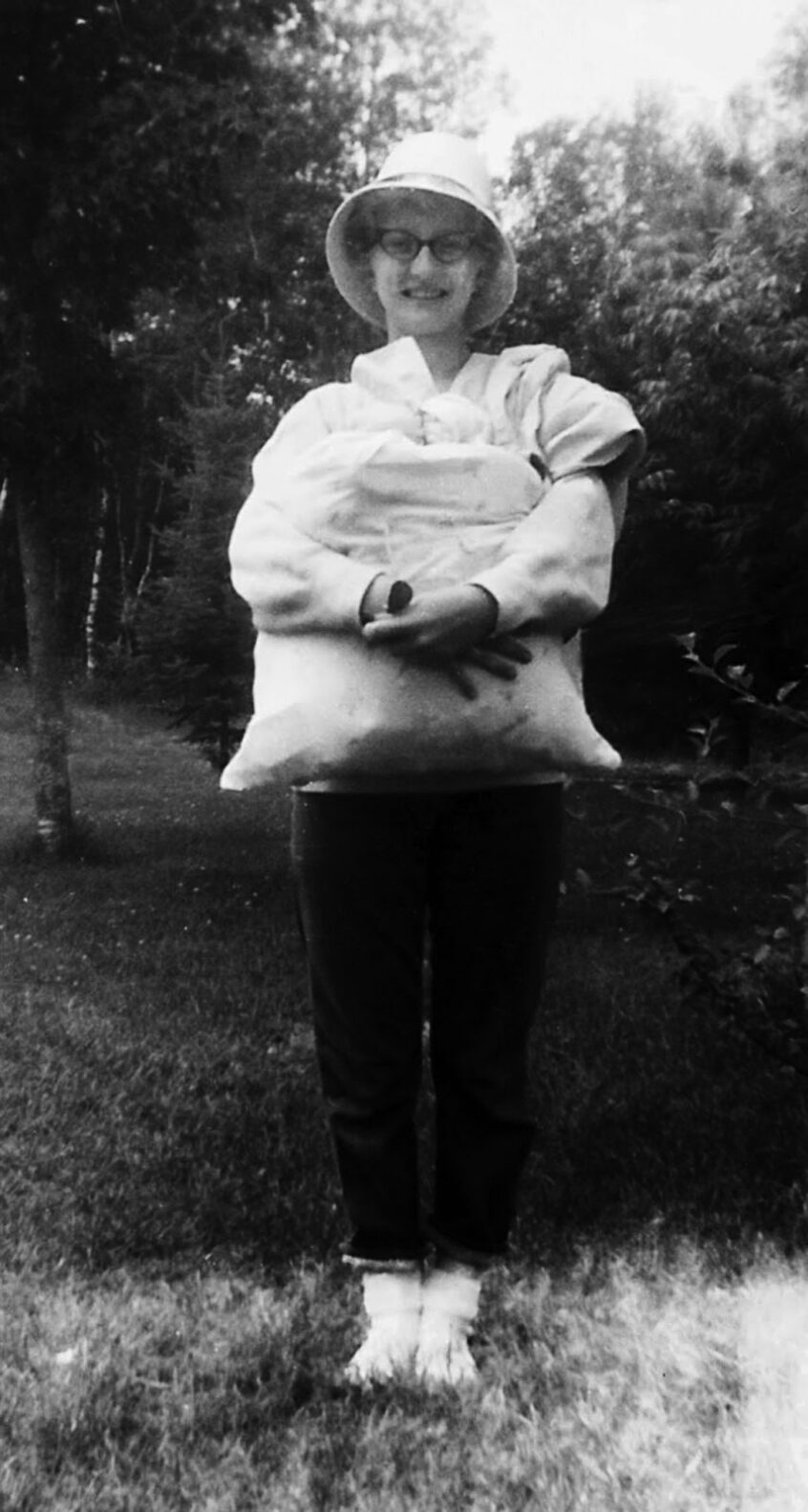 Wilderness is not a luxury but a necessity of the human spirit,
and as vital to our lives as water and good bread. ~ Edward Abbey

It was the 1950s. In addition to being our Homemaking teacher for 7th grade Sewing Class, Miss Soderberg was a professional guide for canoe trips in the Boundary Waters Canoe Area Wilderness on the Minnesota / Ontario border.

Canoeing in the wilderness was her passion. It was what drew her to settle in a small mining town of northern Minnesota as a junior high school teacher. She spent every summer, all summer, guiding groups each week from Sunday to Saturday. Then one night for a shower, dinner in town, and sleeping in a bed.

Our 7th grade Social Studies teacher, Mr. Wold, owned a canoe outfitting company in Ely, MN which was about 100 miles up Highway 169. He offered to arrange for a group of us 12 and 13 year old girls to go on a six-day trip if Miss Sodeberg would agree to be the guide. As far as we knew we were the first group of teen and preteen girls to go to the boundary waters.

Going on a canoe trip for a week sounded wonderful. However, going with Miss Soderberg didn’t sound so great. During Sewing Class she was stern and all business. I don’t think I ever saw her smile, let alone laugh out loud. She kept a lid on us. But all that changed when we left the classroom. She was a different person. She encouraged us to expand ourselves. Oh, of course, she still had very high standards, especially when it came to safety. For starters, we had to be able to swim to be able to go on the trip. It only makes sense.

She gave us a nickname to use instead of Miss Soderberg: Sodie.  She wore blue jeans that had a leather patch on each bun, a logger’s wool plaid shirt, and hiking boots. She was a strong, independent, adventurous, fun-loving woman. She let her hair go where it wanted and got her fingernails dirty. She knew how to use an ax and portage a canoe. She was so cool! She seemed fearless, too. One year there was a bear that was threatening people. A park ranger from the US / Canada Customs office, about a 5 mile paddle away, came and collected her to help him find and tranquilize the bear.

She taught us about camping simply. Always pitch the tents on an island so that we’d be at some distance from bears and moose. About how to put up a pup tent and hang a clothesline for swimsuits, towels, etc. About the importance of never taking anything with odors (food, gum, etc.) into the tent with us – just in case some bear decided to swim. About how to hang all food high up in a tree. We each were allowed one pillowcase of belongings and a sleeping bag. That was it.

She taught us everything we needed to know about handling a canoe and paddling: the J stroke, going into the wind, balancing the load so we wouldn’t capsize, getting ourselves right side up again after capsizing. She taught us about portaging over rocky terrain between lakes. First, the 40 lb. packs. Then the canoes. We were small so it took two of us. And Mr. Wold was okay with us ruining the behind-the-neck part of our orange life jackets by resting the canoes on them.

She taught us how to make a fire pit, chop wood, and build a fire, even with wet wood. About how to cook on an open fire. And how to wash up afterwards. We only cooked morning and night. On the first night and then next breakfast we had fresh food. After that, everything was made from powdered mixes in packets. For lunch each day we would beach a canoe, tip it over, and lay out the squashed white bread, peel away a couple of slices and add pnb and jam. Water for the Kool-aid came directly from the lake.

And fishing. Coming from lake country, most of us knew how to fish already. She taught the others. There’s nothing as delicious as freshly caught sunfish fried up for breakfast! We’d sit on huge rocks facing the lake to eat.

She encouraged us to try new things. For example, we began to do endurance swimming. If we had two people paddling a canoe and if they brought extra life jackets, three or four of us could swim across a lake and back. That might be several miles. We also discovered that when we went swimming near camp, we could take a canoe out into the lake with us and turn it over. It served as a raft. And if we went under it, there was a big hollow space. We could all get under there and sing and laugh. The sound was amazingly amplified and magnified. I’m sure it could be heard for miles. But, no problem. Most always there wasn’t anyone else around anyway.

If there were others around, they were probably coming from the other direction. It was always so exciting when we saw canoes approaching! We hadn’t seen anyone else in days. She taught us to always invite them to stop and to keep the coffee pot on or near the fire. If we were headed further into the wilderness, they would share what conditions were like. We’d have them carry news back to Mr. W about how we were doing. And, of course, it worked the other way as well. If they were headed out and we were headed home, we would carry news for them.

Then there were visits to the US Canada Customs office so that we could freely travel back and forth across the border though, in most cases we never really knew we were crossing. She taught us to read topographical maps so we could know where we were if we wanted.

And always a stop Knife Lake Dorothy’s, an older woman who lived by herself on Knife Lake. Year around. She was famous for her homemade root beer. Her place was like a pub in the middle of nowhere. Everyone stopped in. There were seasons when she could not travel or receive visitors. There had to be no ice or solid ice. Imagine! And the temp gets to -50º F / -45.5º C and even colder during some winters. Yet, she seemed to be quite normal.

Those trips each year were a highlight of my young life given the adventure itself on one hand and the true joy of being immersed in nature and the elements on the other. When it rained we got wet. Thunderstorms were common but without all of the scary TV warnings of today. We could see them coming so we’d put everything away and then sit on the rock to watch the beauty of the lightning. And when the rain came we’d get in our tents. Mosquito bites in the early and deer fly bites in late summer were givens. That time in the wilderness offered us the gift of briefly breaking away from ‘technology.’ Even though, in those days, that just meant plumbing, electricity, landline telephones, radio and TV, airplanes, and alarm clocks.

Canoe trips were much like what I experienced with Grandma as a child. I wrote about it last week in My Job Was Water. Except, for starters, ‘camping’ at Grandma’s house had four walls, a floor, and a door. And an outhouse.

I continued to go on canoe trips with Sodie every summer from then on throughout high school. She was succh a wonderful role model. After my freshman year in college, I trained with her to be a guide myself. But that’s another story! 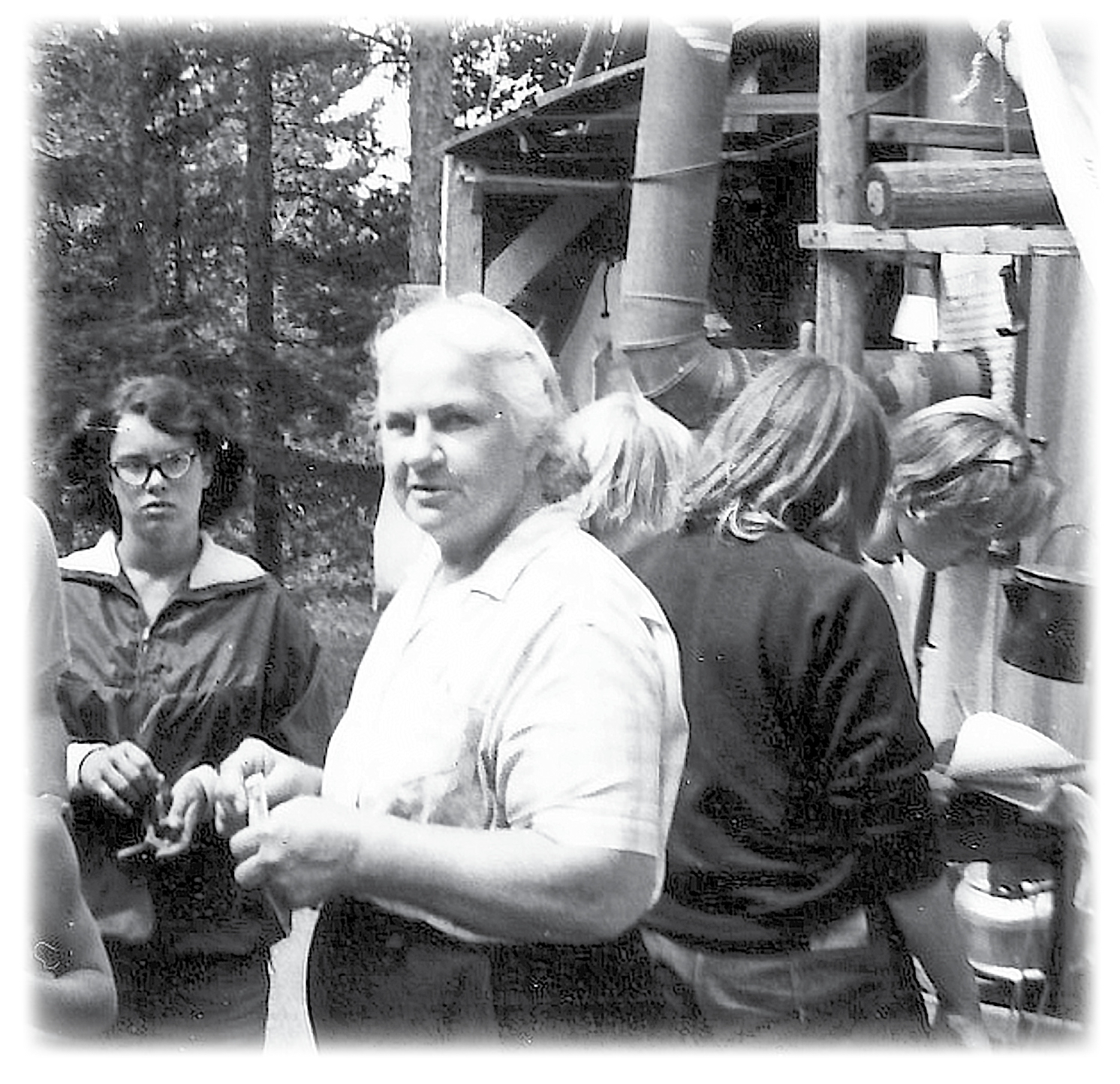 Top photo: Me when I was 14 or 15.
Heading to the Boundary Waters with my pillow case once again.

Bottom photo: Knife Lake Dorothy
A pub in the wilderness