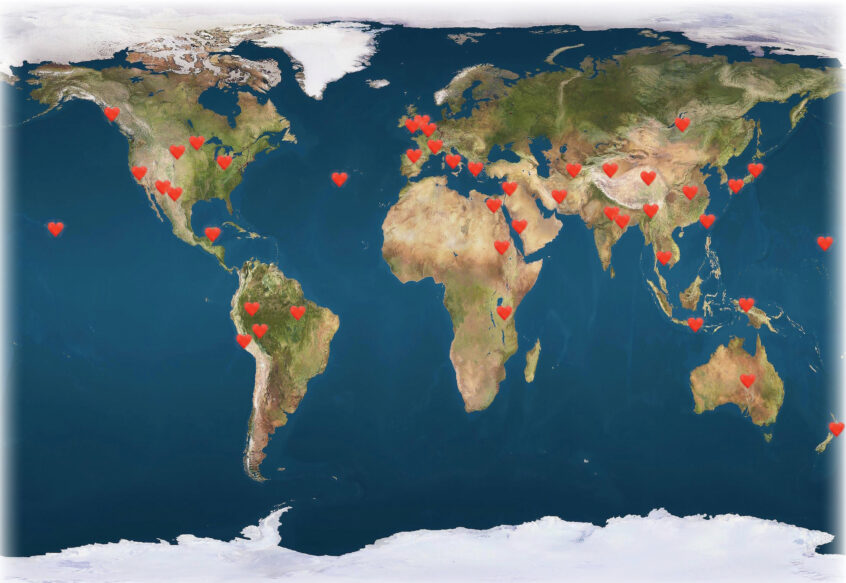 If we see randomness, it is only because we don’t yet recognize the pattern.  ~ M.J. Rose

This week launches us into a whole new level of healing and hope based on a quest for The Holy Grail: wholeness. Until now, the story has been focused at the personal level, on personal healing. Now we lift the focus by at least an octave, and perhaps more like a magnitude, to include the global level and global healing as well.

The door had been opened by my experience with the green temple in Japan that matched the design called Luscious Life. I had laid out a National Geographic world map on a table and had all 44 pieces on their sacred homes on top of it. It was difficult to discern much because the pieces rather overwhelmed the map. Also, it was a political map with national boundaries. I wanted the stones to be connected to an image that did not have artificial and temporary national boundaries based on human conquest and a false belief in ‘ownership.’ I consciously wanted the natural features of our beautiful home, Earth, to predominate.

So off I went to the map store. I found a beautiful large wall map with natural physical features and without national boundaries. I had it laminated and brought it home a few days later. I used little red heart stickers to show the locations of the sacred homes. Good. I hung it where I could see it when I meditated.

Now it was time to contemplate and ask questions. The focus was about the apparent randomness. Was there any relationship between the locations? Any coherence as a whole? Was there any significant collective meaning? At some level, I knew there must be an affirmative answer to each and all of these questions. But what might it be? I had no idea.

In addition to asking questions, I was reflecting on what I knew already. First, the sacred homes are on six continents. Secondly, they surround the earth. Third, using the metaphor of a human body, I could see that they are roughly between the shoulders and the knees. Said in geographic terms, they are all within the range of 60º North Latitude and 60º South latitude. Nothing in Alaska, Scandinavia, or Antarctica, for example. That was about it at the time.

I no longer remember how long this time of contemplating the map lasted but I know that it was longer than a few weeks and probably more like a few months. Usually when I raised questions, the angels would step in with a clue if not with specific guidance. However, I didn’t receive anything this time. At least, nothing I recognized.

The only thing I received was a dream similar to one I had more than 20 years earlier. It was of a choir of angels wearing pastel gossamer gowns and singing gloriously. The initial dream was when I became aware of them for the first time. Vivid. Real. I was thrilled at receiving such a nourishing second dream. Both dreams were filled beauty, grace, awe, and hope; so loving, affirming, and supportive.

The second dream especially gave me a sense that I was on the right track and to keep going. That’s what I took away. I did not associate it with being the beginning of a response to my questions. Yes, what I didn’t comprehend at the time that became obvious later was that their singing WAS a clue. Indeed!

The map you see above is in the pubic domain. The hearts are emojis I copied and added. Again, neither pubic domain photos nor emojis existed in 2003. Thus, it didn’t occur to me to use the computer to show the locations of the sacred homes at that time. On reflection, I also see that I did a lot of printing in those days as well. As I write I notice, with a kind of awe, just how much change has occurred that I hardly noticed.