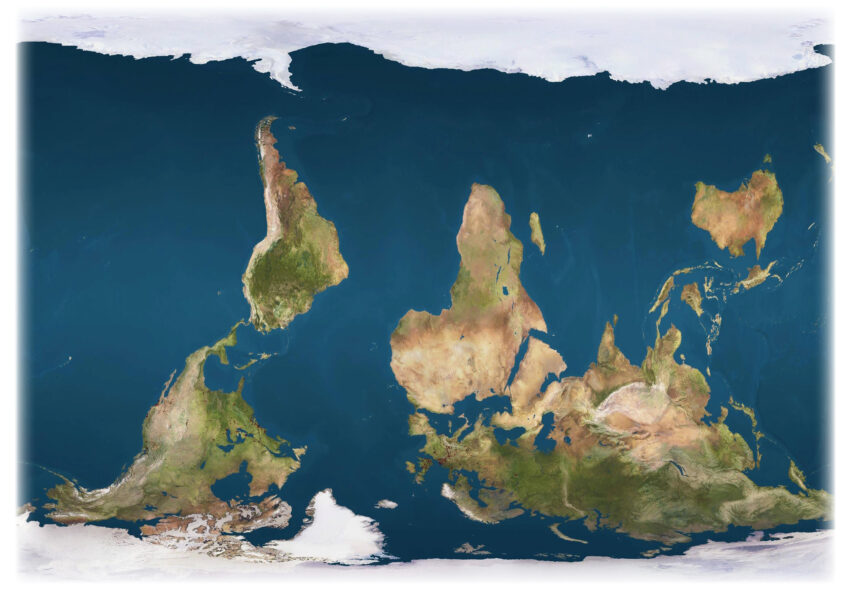 It’s a rare moment when we take a break from the tribulations of the daily rat race to reflect
on assumptions and values that we casually accept as gospel.  ~ Graydon Carter

Begin challenging your assumptions. Your assumptions are the windows on the world.
Scrub them off every once in awhile or the light won’t come in.  ~ Alan Alda

Over the last few weeks, while working with the flat world map, I’m seeing that model  of mental geography anew. A couple of weeks ago I mentioned that if we flipped the map, it would look very different. We’re used to it the way we most commonly see it.

So I flipped the map. The first thing I noticed as a result was how much water there is on the upper half of the flipped map. The second thing I noticed was how scrunched up the land appears in the lower half. And I wondered, now why did these two observations capture my attention? I think it’s because I’ve become conditioned to looking primarily at the upper half of the map when it’s not flipped so what I see mostly is land not water. I’ve known intellectually that there’s a lot of water below the equator, of course, but it looks very different, at least to me, when it’s above the equator. And the land looks different when it’s below the equator.

Our world maps are one of those alchemical intersects of science and magic. We know that our home planet has two magnetic poles that are more or less opposite each other. That’s a scientific fact. Where the ‘magic’ comes in is that somewhere along the way at least hundreds, if not thousands of years ago, when drawing early maps, one or more humans invented the four cardinal directions: north, south, east, and west. And they named one magnetic pole the north pole and the other the south pole. In truth, the earth does not have a ‘north’ or ‘south.’ When we see it from space, we can see physical features but we do not see north or south. It’s a creative human invention. Of course, because of our conditioning and assumptions about how we have learned to view maps, even when looking at the earth from space, we humans apply the convention of north and south.

We see the earth as rotating clockwise from what we call east to west. It’s another human invention. Scientifically, the earth rotates. Period. That rotation has nothing to do with clocks. Flora and fauna respond to seasons and patterns but not to months, days, hours. They do not have clocks. And, furthermore, leaving convention, we could flip maps and globes by 90º. In that case, we’d see the rotation as being vertical from what we call north to south.

I was to be a teacher at a company school in the center of The Dominican Republic for a year. I arrived at the Santa Domingo airport at night. I was met by colleagues who drove me to my new home. When I woke up the next morning, I found that the sun was rising over the mountains…in the west! I’m pretty good at directions. But, somehow, on that drive from the airport in the night, my internal sense of direction got turned around. For that entire year, the sun rose in the west and set in the east. I had to consciously think about reorienting myself to make it fit convention. Two things interest me about that experience. First, so what if it rose in the west for me? It was the same sun and same earth doing what they always do. Secondly, when I left the town where I lived to go camping on the beaches in the north or grocery shopping in the south, everything returned to its ‘proper’ orientation.

Another aspect of conventional flat wall maps is distortion. It’s an attempt to make a three-dimensional sphere into a two-dimensional picture. The most common one today, like the one above when it is not flipped is the Mercator Projection. And we mostly agree to accommodate the inaccuracy of it. Let’s take Africa as an example. Though I’d seen Africa as being the way it appears on conventional maps, I learned something quite different through experience. I was headed to Ethiopia via Dakar and Nairobi. My plan was to visit friends from my Somalia days in both of those places. The flight across the Atlantic from New York to Dakar took about 6 hours. The flight from Dakar to Nairobi took 11 hours in the air and not counting time on the ground in Lagos. To my eye, when I look at the map, the distance across the Atlantic Ocean looks to be about the same as the distance across the African continent. Yet, in truth, the distance across Africa is twice that of the distance across the ocean.

This map of Africa gives us a much more accurate picture of just how enormous Africa really is relative to other parts of the world. Never mind that we’re comparing apples and oranges; a continent and countries. 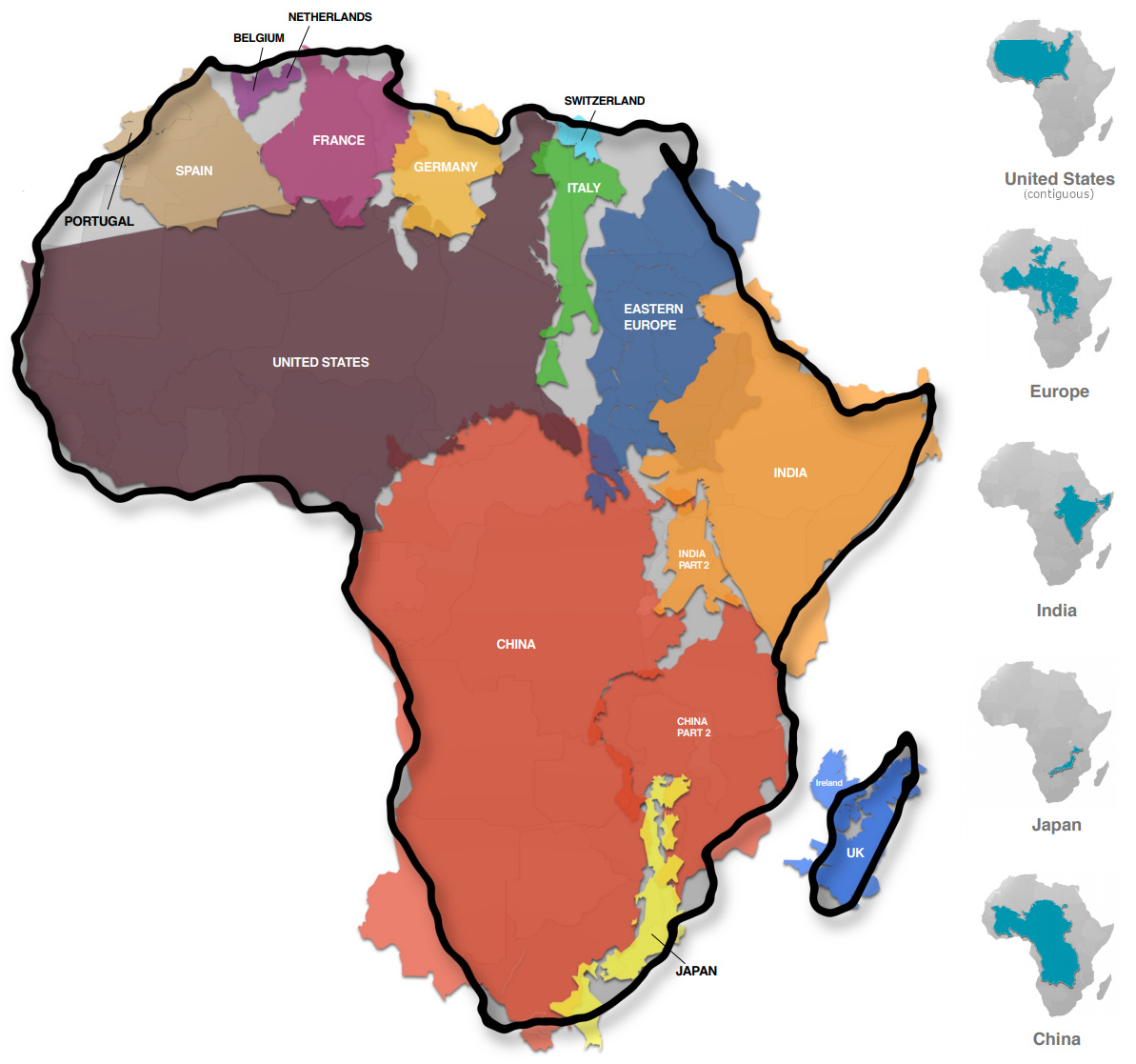 There have been some attempts to make flat maps that more accurately reflect the earth; to make the relative size of the continents more accurate, for example. One is the Peter Projection (in green). Yet, while it helps us see how big Africa really is in size, the shape of the land masses on the map are distorted in order to make that possible.

I have loved maps since I was a little girl. Especially flat maps. Geography was a concentration of mine in graduate school. We’ve been more or less in agreement about the assumptions we apply to flat maps since forever. I’m guessing that will continue for some time yet. Whether accurate or inaccurate, flat maps are a wonderful invention because they give us a way to ‘hold’ the earth in common. At the same time, for me, it’s also interesting to challenge our assumptions about them as well as to see both the science and the magic in them. 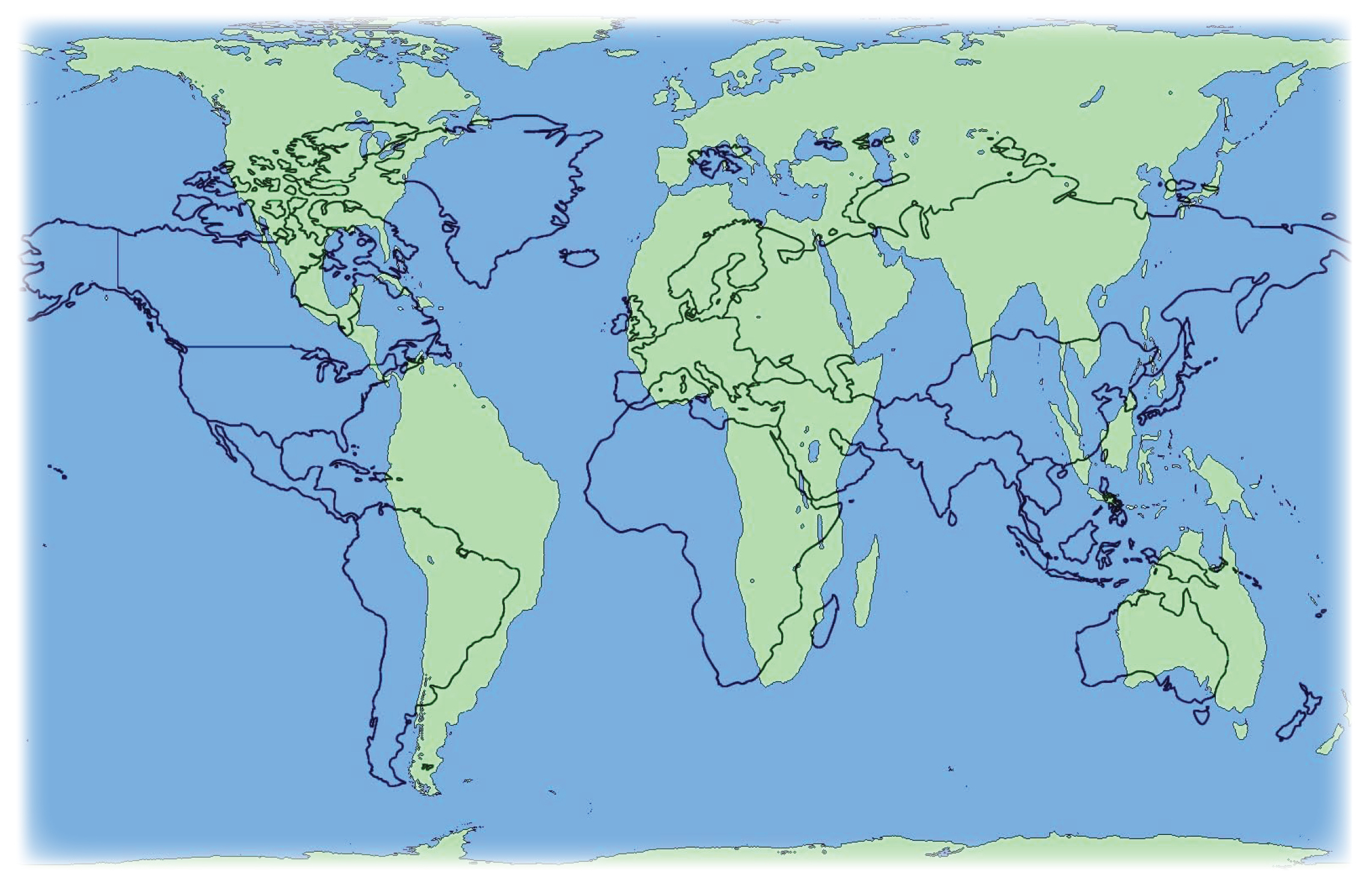