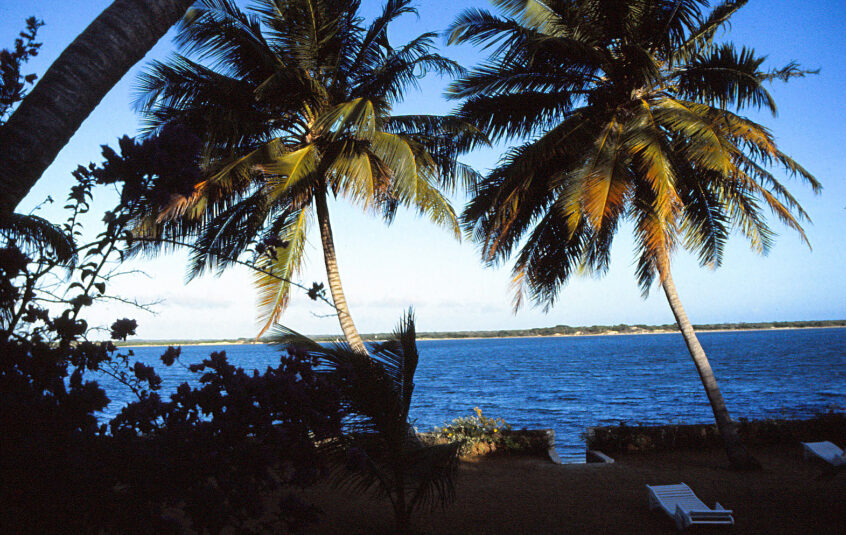 The view from the doorway of my guest house room on Lamu Island, Kenya, 1984

When I lived in Mogadishu, Somalia, in the 1980s, it was considered something of a hardship assignment. As a result, every six weeks or so I was able to leave for a few days. I always went to Kenya. On almost every visit my routine was to shop in Nairobi for a day or two especially for food we could not get in Somalia – like cheese – get a haircut, and enjoy a great meal at one of the Indian restaurants. So good! Then I would rent a jeep and spend the rest of my time on self-organized safaris to one of the wonderful game preserves like Masai Mara, Amboseli, Lake Nakuru, or Samburu.

However, on one trip I decided to do something different. I had heard about a mostly unknown town on an island on the Kenyan coast. I flew from Nairobi to Mombasa and from there I took a small airplane north to Lamu. Every seat was filled. The others on the plane were a family of four returning home from a trip to Nairobi.

The Lamu area was idyllic. At that time, it was pristine and quiet. That trip was one of the most wonderful solo vacations I’ve ever had. While there may have been more somewhere, I only encountered one other tourist – another young American woman. We were in adjacent rooms at a very small guest house. We shared some meals together and one day we rented a dhow together to explore the coastline. But we also took a lot of time to ourselves. For myself, I liked walking the beach. Clean golden sand for miles. And I liked exploring the town which was built by the Swahili in the 1300s.

Fast forward: In 2001 Lamu became a UN World Heritage Cultural Site. Bravo! And it had become a well-known tourist destination with many new hotels.

But now enters a rub. At some point since 2001, plastics began to intrude. Plastic debris was being pushed onto the formerly untouched Indian Ocean beaches. The bulk of it was one-time use plastic bottles followed closely by other plastics – like flip-flops! Hundreds of thousands of them.

As a result, the town’s World Heritage status is threatened. As is their primary industry: tourists. The local people do try to keep the beaches clean but the amount of trash is greater than their capacity to get rid of it. I watched a video where the narrator said that on one organized clean-up the local people gathered 33 tons of litter. 33 tons! The narrator also said projections are that if we don’t change our ways, in 50 years there will be more plastic in the oceans than there are fish. 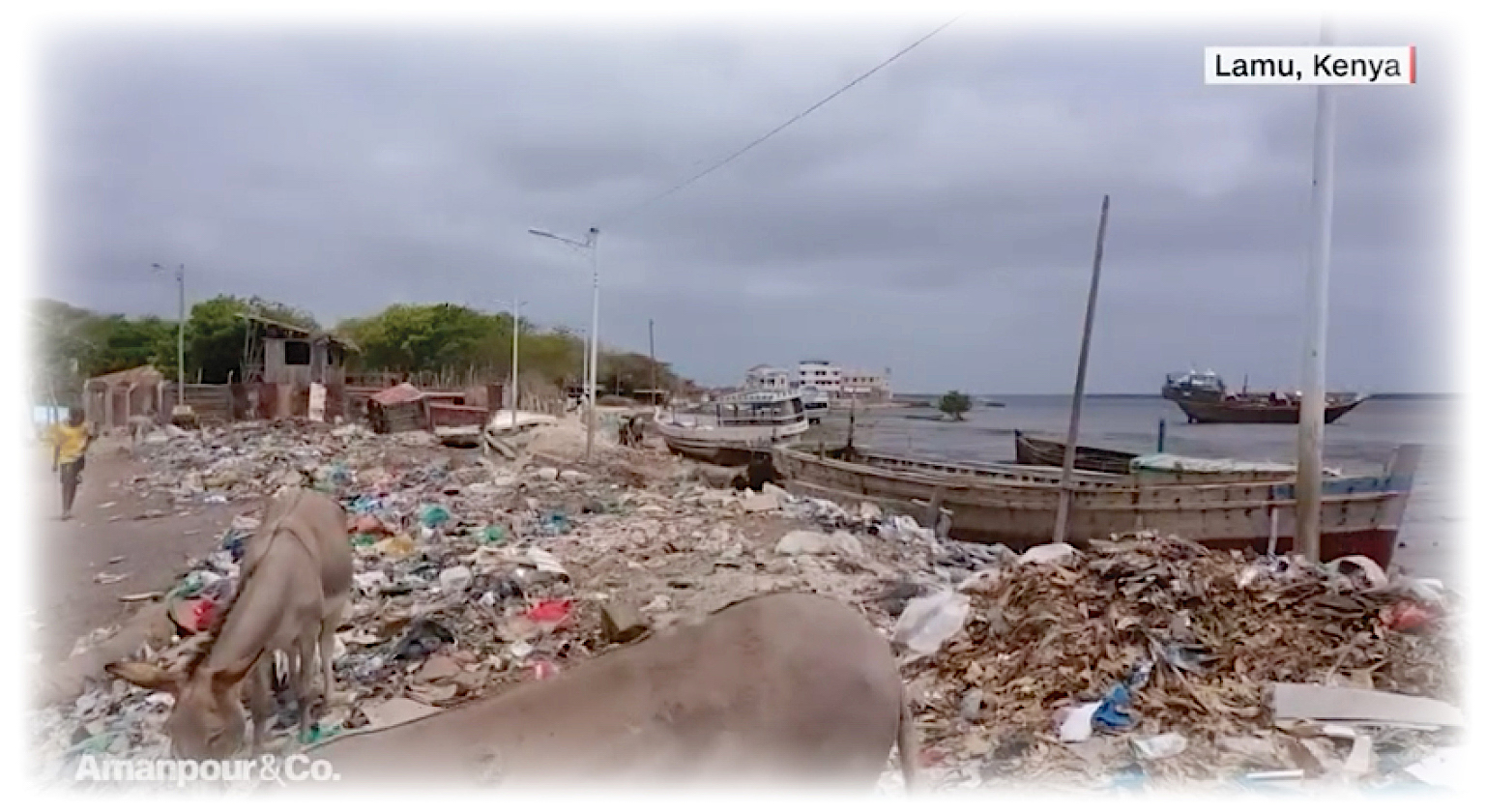 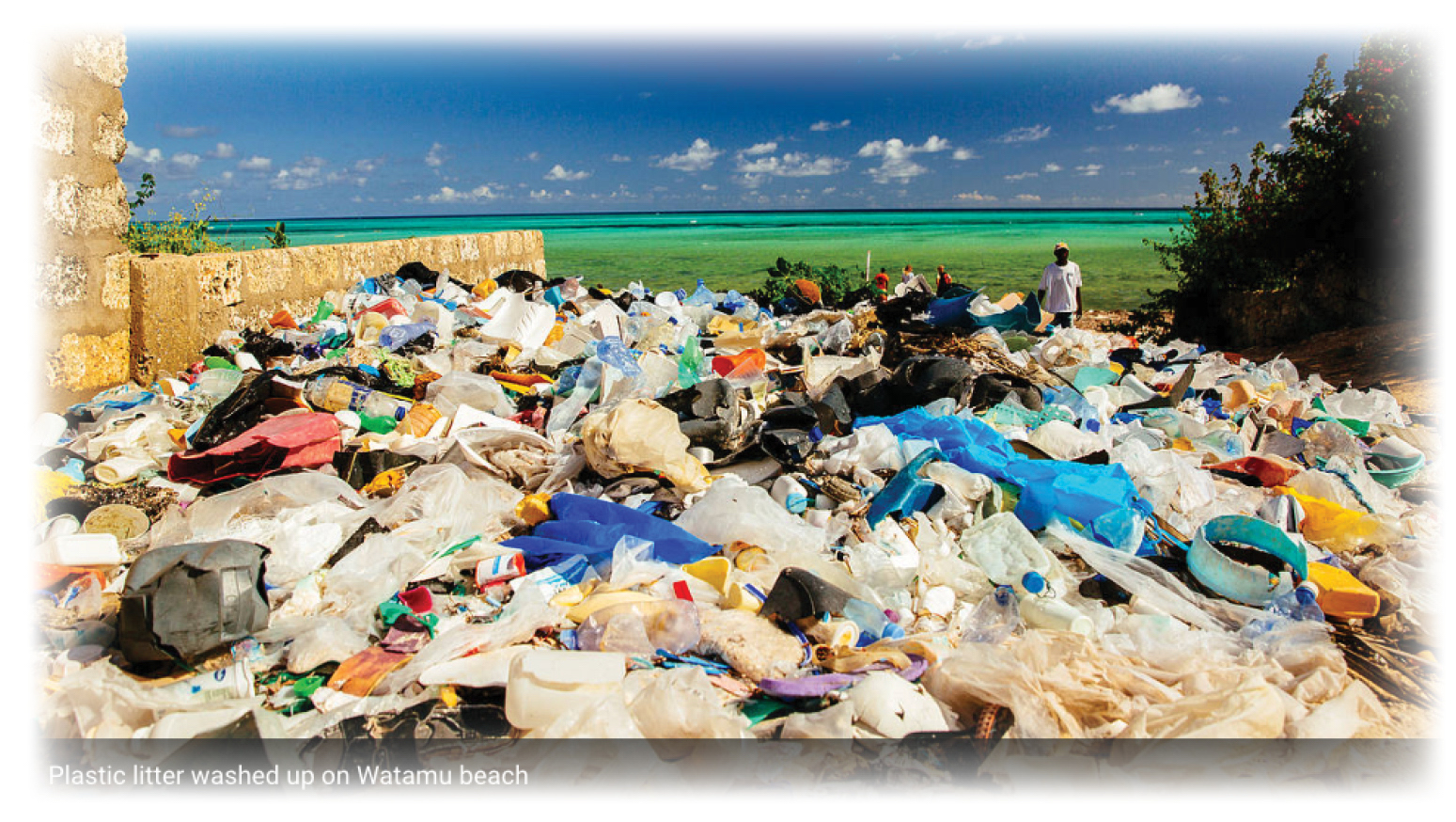 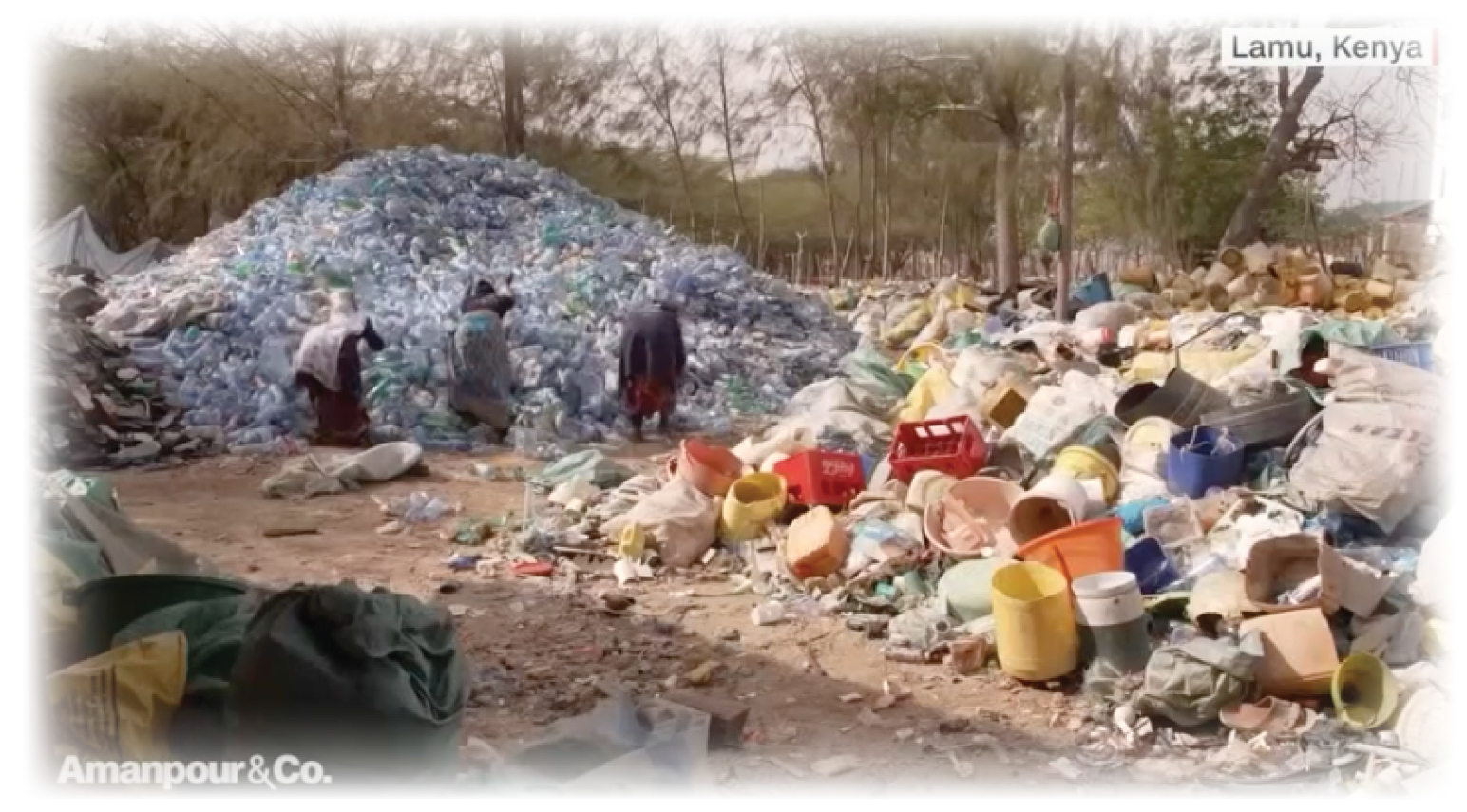 Then enters an oil-backed trade group that is lobbying to push plastics across Africa with Kenya being the manufacturing hub. Some of the companies included are Shell, Exxon, Total, DuPont, and Dow. Here’s an excerpt of a letter from the ACC (American Chemistry Council) to the Chair of the Trade Policy Staff in Washington, DC. in April 2020.

“A high-standard, comprehensive, market-opening agreement between the United States and Kenya will be an important model….With this foothold, the United States can play an influential role in shaping trade policy across Africa, demonstrating that rules-based trade can spur economic growth and development. The United States can also use this agreement to build a platform for U.S. chemical manufacturers to expand exports to and enter new growth markets.”

Many forms of single use plastics – like plastic bags – have been banned in Kenya and can result in prison time of up to four years and / or a rather hefty fine – especially by Kenyan standards – of $40,000. So to make Kenya a hub for plastics manufacturing in Africa would undo everything they have done to manage single-use plastic to this point.

I recently watched a three-part Frontline program entitled The Power of Big Oil. The three parts are called Denial, Doubt, and Delay. One key message in all three is that the oil companies have done comprehensive, ongoing research and they knew emissions would affect the climate but they sent us a different message. Not necessarily pleasant to watch but I highly I recommend it. Their greed knows no bounds! 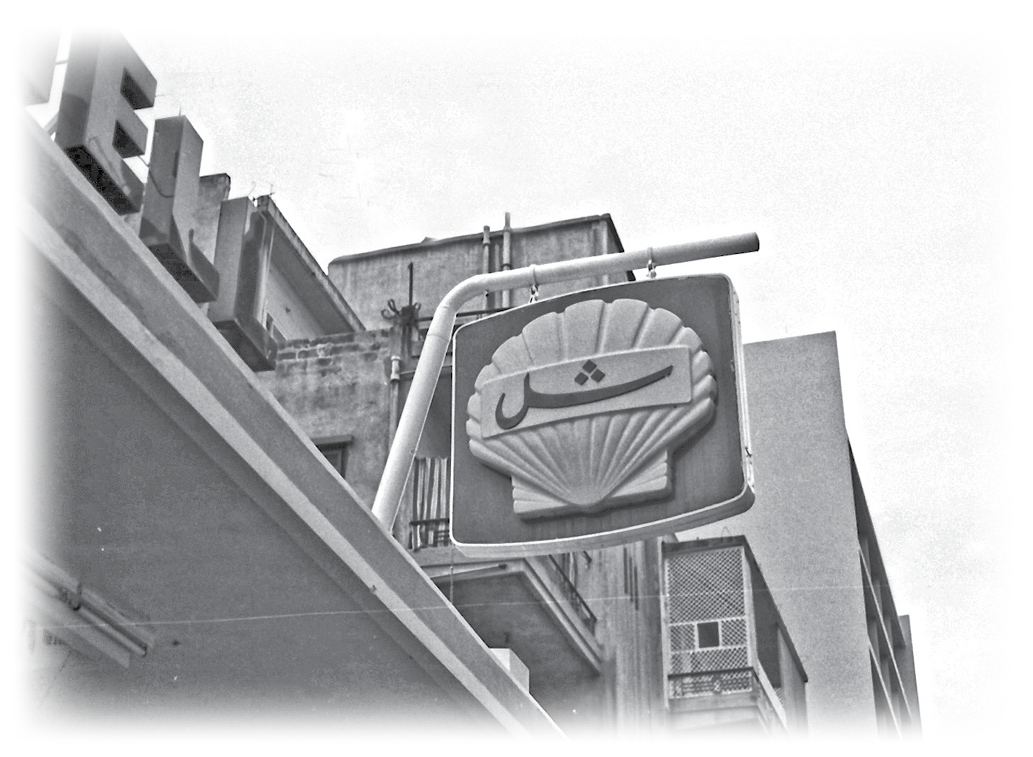 Just one example is a local master boat-builder whose family of boat-builders goes back to the origin of the town. He decided to try building a boat using recycled plastics. And not just any boat, but a traditional dhow using innovative methods to prepare the materials and traditional methods to build it. Then, to test whether the new dhow was sea-worthy, they sailed 300 miles from Lamu to the island of Zanzibar in Tanzania. It worked! And recycled plastic struts saved 50 trees from being cut down. That’s the number of trees it takes to build one dhow. The first boat, multicolored, included 200,000 flip-flops. 30,000 of them were used for the colorful tiles on the outside of the boat.

Recycled plastic struts are strong and save 50 trees from being cut down per boat! 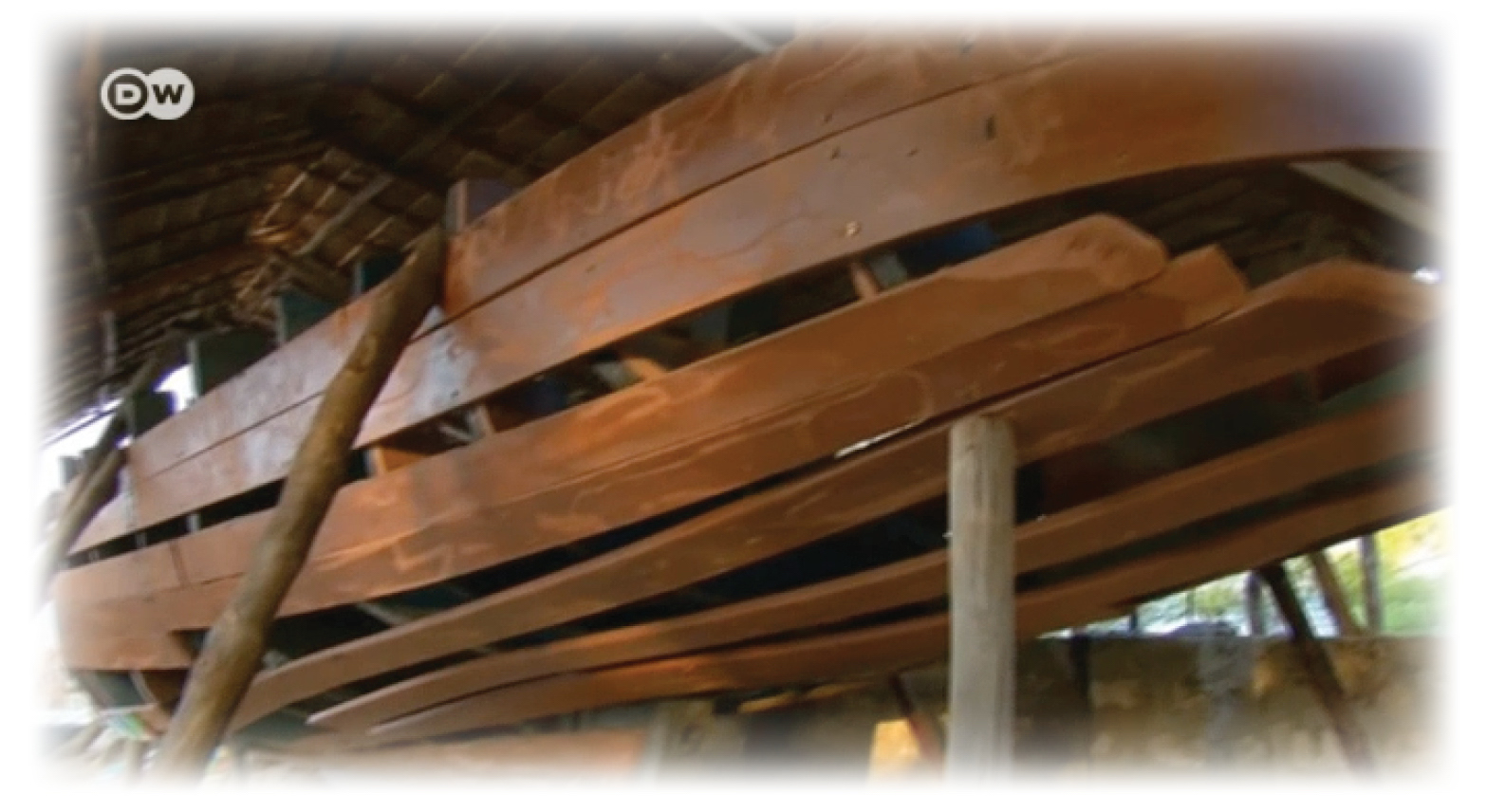 The sea-worthy result includes a colorful hull made from 30,000 flip flops. 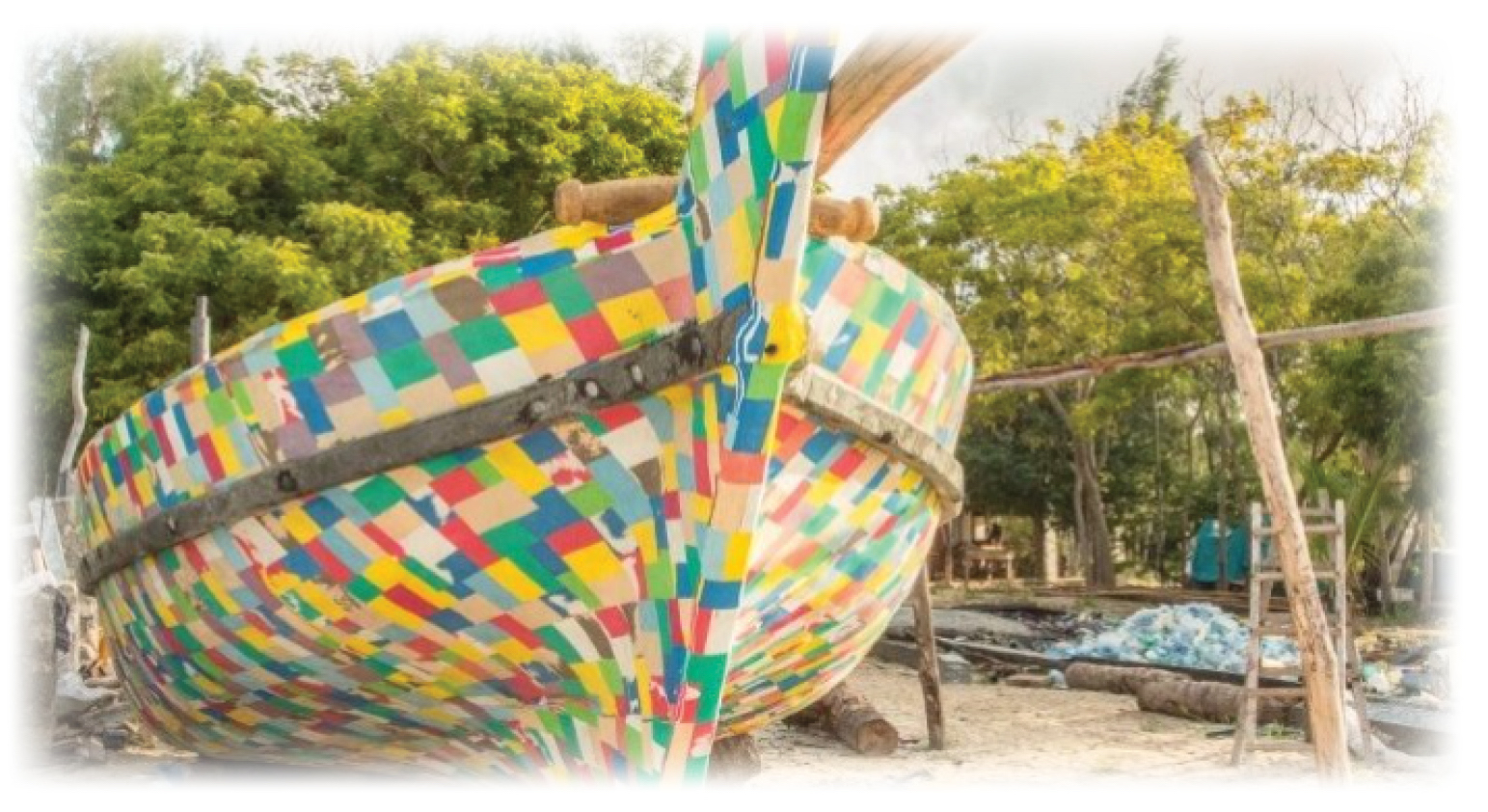 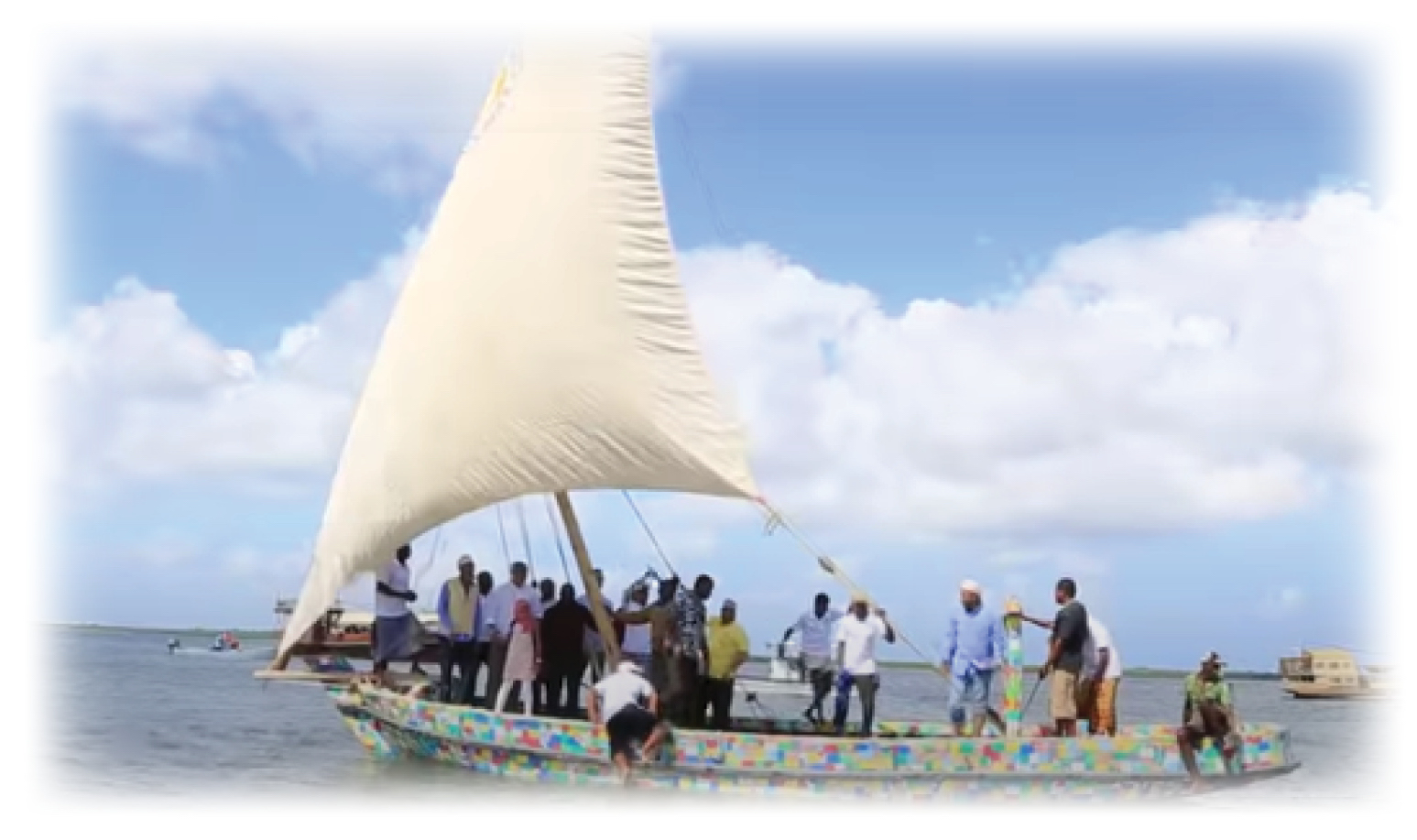 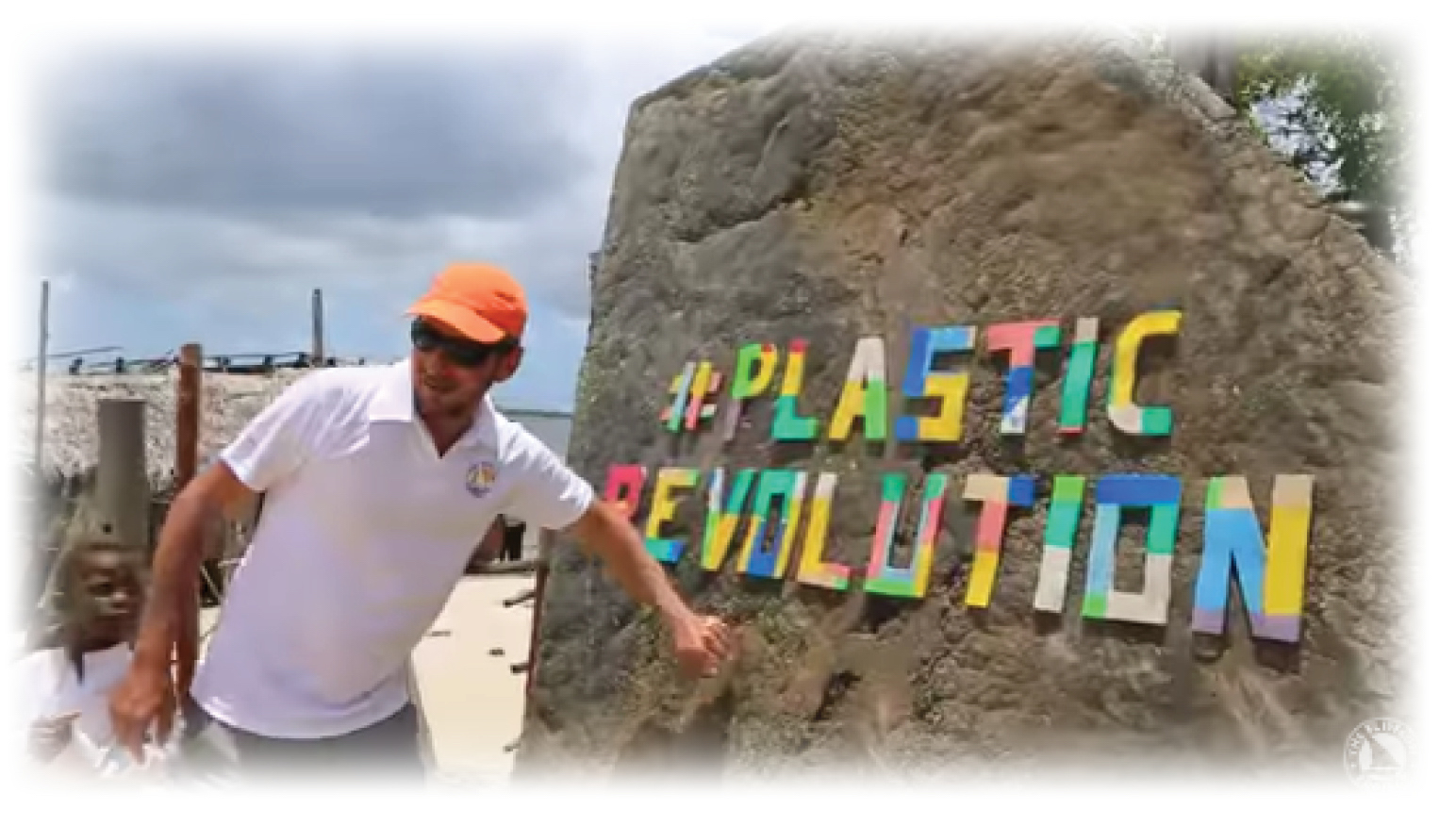 We have demonstrated that if you can build a boat capable
of sailing thousands of kilometers essentially made of old
toothbrushes and Jerry cans, then everything is possible.
As we say in Swahili “Kila Kitu Inawezekana”.

Note 1: As for the ACC’s proposal, I don’t know where that’s at. The best I can discern is that it was sent to the Trump Administration but, so far, has not made it to the Kenyan government.

Note 2: As I been writing this, I’ve been reflecting on how I might be contributing to this problem. Some years ago I bought a good water filter and gave up bottled water. So that’s good and works well. But then I looked at the groceries I buy and notice that virtually everything is packaged in single-use plastic. From yoghurt to brown rice spaghetti to figs to snacks to cleaning supplies to…. And that’s just one example. It’s pervasive. I don’t have a clue as to how to get around it.

ACC Public Comments on U.S. Negotiating Objectives for a Trade Agreement with Kenya

Other photos from various sources listed above