Nature is the guardian of Africa. While the sun lights the African sky in day time,
the moon begs the world to help her lighting Africa in the night. – Munia Khan
.
Africa is vast both culturally and geographically. The flight from New York to Dakar took 6.5 hours as we crossed over the Atlantic Ocean. But what blew my mind was that the flight from Dakar to Nairobi took 11.5 hours after subtracting the 2 hour stop in Lagos. Until then, I had not been aware of just how vast Africa is. I was moved enough to make a journal entry about the vastness (in flight time) and also about the darkness. It was as though there was nothing below us. Not a single light for hours. Even when flying over an ocean at night there is occasional light from a ship. The Sahara was dark because of very sparse to no electricity at the time.
.
The map above is helpful because it shows us the relative size of countries in the world. The first thing I noticed when I looked at it is that the countries between the Tropic of Capricorn and the Tropic of Cancer are already mostly accurate. It’s the countries in the northern latitudes that are the most distorted. The second thing I noticed was that the Atlantic Ocean appears to not be accurate. Otherwise, how could I get from New York to Dakar in 6.5 hours? The ocean looks to be about the same size as Africa. It isn’t.
.
I was flying Pan Am. I’d always thought of it as a great airline before this. The flight from New York was a non-event. The plane was clean, the food was okay, the bathrooms worked. The flight from Dakar to Nairobi was a whole different story. Soiled carpeting, ripped upholstery, iffy bathrooms. Now, why was that? I guessed that the Dakar-to-Nairobi-with-a-stop-in-Lagos-run was not all that popular. I remember thinking to myself, if the passenger part of this airplane is in this much disrepair, I wonder about the mechanical parts. I sure hope they are being maintained! Yet one more unexpected adventure. Not too long after, Pan Am discontinued service to Nairobi – which explains a lot. And not long after that, this vanguard airline went out of business altogether. The mmap below shows the Pan Am African routes in the 1970s and 1980s. 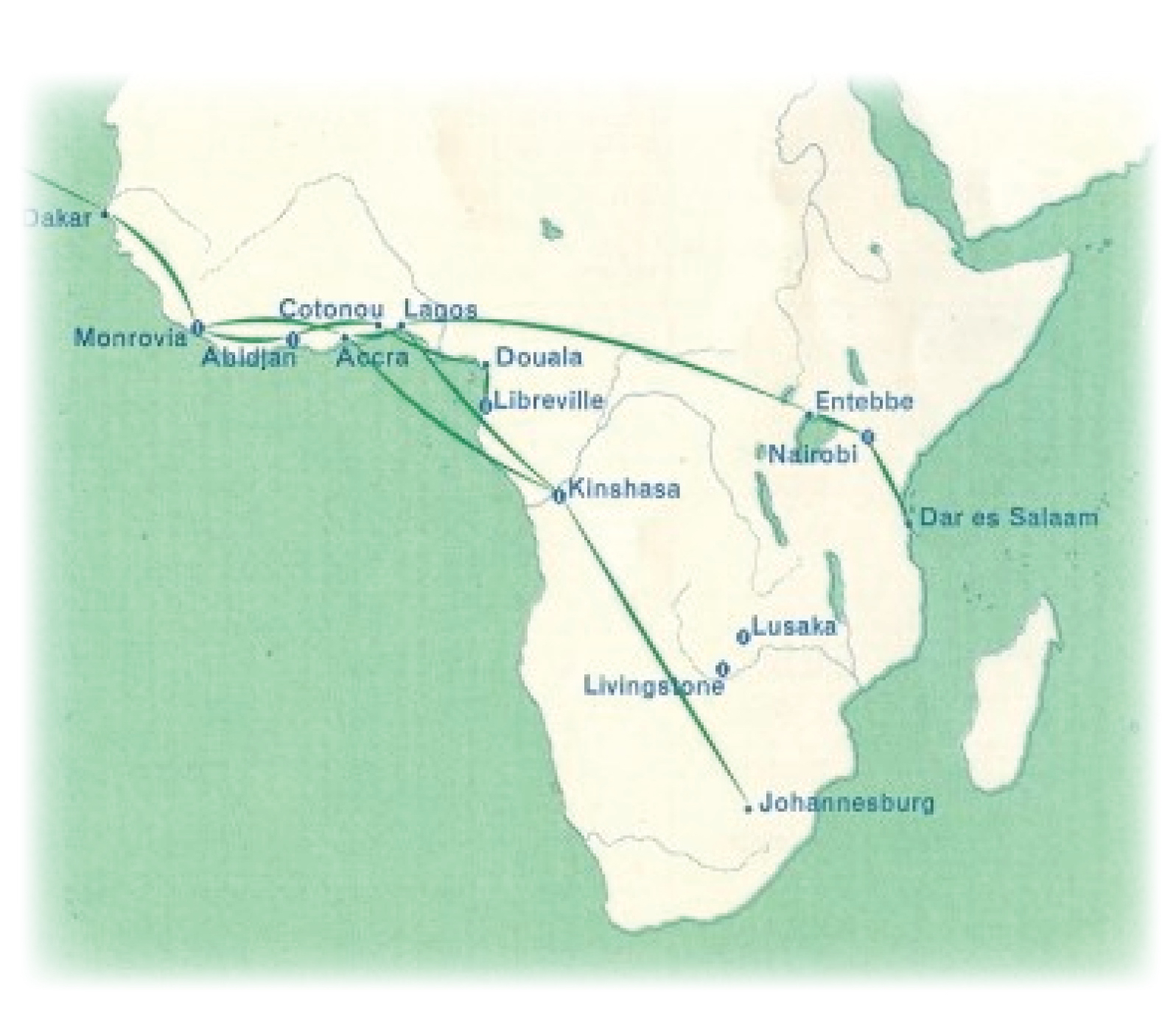 When preparing this story, I did some research on flight times today. The flights to and from NYC to Senegal range from 7.5 to 9.5 hours. An hour to 3 hours longer than the flight I remember. The flights from Dakar to Nairobi with one stop are about 14 hours. If we include the 2 hour stopover, the length probably comes out to be just about the same as the flight I took. The big difference is that many of the flights between the two cities are African airlines these days:Ethiopian Airlines, Kenya Airways, Air Mauritania, and ASKY (The Pan African Airline).
.
But then, what accounts for the longer flight time over the ocean? Maybe it’s traffic? Travel and Leisure writes, “There is an average of 9,728 planes carrying 1,270,406 passengers in the sky at any given time.” Can that be true? Seems like a lot to me. But then I remember that there are now 8 billion of us so a little over a million is equal to about 1 in 8000 people. I suppose that’s possible.
.
You can view a live interactive map of flights globally at flightradar.live/en/flight-tracker/. First, what I notice is that Africa is still the emptiest place in terms of flights in the world. I wonder, what part of that is true over time and what part is related to Omicron. Secondly, I’m breathless at the thought of the amount of fossil fuels this global image represents.