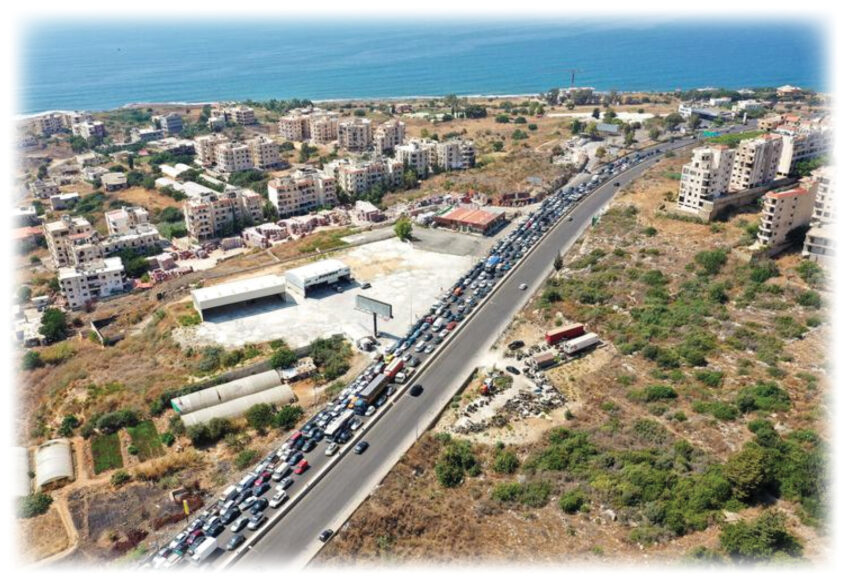 .
Half of Lebanon’s children need humanitarian aid. The war in Ukraine
has caused rising food prices and could exacerbate a national food crisis.
The UN said 2 million Lebanese, about 57% of the population, are
now living in a vulnerable situation with 77% not having enough money
to buy food. Not to mention the 1.8 million refugees and immigrants
living in Lebanon including 700,000 Syrian refugee children
already living in dire conditions. The conflict in Ukraine has
deepened the situation in Lebanon. In 2019 [the country] sank
into one of the world’s worst financial crises in modern history.
~ Middle East Monitor, April 17, 2022
.
The Lebanese crisis is among the three worst crises in the world in the last 150 years.
~ The World Bank
.
.
I remember my mother’s vanity. It had drawers, a mirror, and it was covered with a thin veneer. It looked nice. But once the veneer cracked its beauty was more or less finished. The veneer just wanted to curl and peel away more and more. And we could see the ugliness that was beneath that very thin, fine surface.
.
There have been a few times in my life when I have spent time in a country prior to its collapse. When I visited relatives in Slovenia in 1967, I remember my father’s cousin telling me that when Tito died, Yugoslavia would die. I visited her again in 1989 and she told me war was coming. And it did come soon after my visit. Civil war in Lebanon followed my time living there. And Somalia, Sudan, Syria, Cyprus, Greece, Peru…. The list goes on. These experiences have made me acutely aware of how very, very thin the veneer of ‘a civilized society’ really is. There is, more often than not, a lot of raw tension beneath the good looking veneer.
.
In the end, ‘a civilized society’ is a set of agreements we make with each other. It more or less works as long as we keep the agreements. The boundaries can be stretched – like a rubber band – with protest and dissension and criticism. In fact, such stretching can be good and strengthening and add resilience. However, when any society (or rubber band) is stretched beyond its capacity, it snaps. It breaks. One of the latest to break is Beirut, Lebanon. What’s happening there not only breaks the metaphorical rubber band, it also breaks my heart. You see, I lived in Beirut, Lebanon, between the Six Day War and the Yom Kippur War. Conflict and the threat of conflict were a way of life. But, in spite of that, I never felt threatened personally. In fact, my time there was a very special experience.
.
I read an op ed piece in The New York Times written by a woman who lives in Beirut: “Lebanon as We Once Knew It Is Gone.” She began with “I never thought I would live to see the end of the world.” She writes of how she’s exhausted before the day begins; of how finding bread and bottled water took her three hours one morning; how she had government-provided electricity for one hour and generator power for four hours per day; how they haven’t had a government since the explosion in the port; how there’s a fuel shortage and people start lining up the night before in hopes of getting fuel (see photo above).
.
She wrote: “Beirut as we once knew it is now gone. Even during the 1975-90 civil war, the city enjoyed a certain cachet. There was shelling but there was also glamour, a zest for life like an electric current. But now the strips of nightlife are mostly shuttered and dark. During the war there were cease-fires that permitted some rest, however fleeting. But in a world run on fossil fuels, what life is possible when they are no longer available? What life without electricity, cars, cooking gas, the internet, drinking water? There’s no break from this kind of economic warfare….
.
“In a world where the maximalist pursuit of profit is supreme, such behavior is simply the way the system was built to work. Lebanon is not an exception. It is a preview of what happens when people run out of resources they believe are infinite. This is how fast a society can collapse. This is what it looks like when the world as we know it ends.”
.
Lebanon has an election coming up next month. In “The National,” James Zogby wrote, “Without exaggeration, what will be decided in this election is whether Lebanon has a chance to survive.”
.
.
Photo: A traffic jam caused by cars lining up for fuel.
Damour, Lebanon, Reuters.