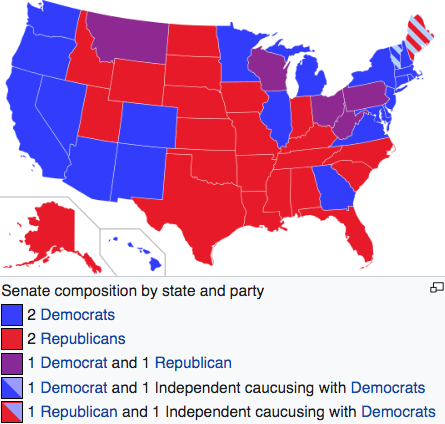 Guns are part of the Constitution, and no one is willing to have that tough conversation
with Congress [sic] and the Senate and the president to say maybe that’s got to change.
People talk about it – but I mean actual change. ~ George Stroumboulopoulos

This week I’ve been musing about why the US Senate is so stalled most of the time. Yesterday a compromise was claimed regarding guns and gun control though nothing is in writing yet. The other day I heard the senator leading the effort say that ‘something, anything’ needed to happen. I think that may have been achieved. Something, anything, I mean. I also heard another senator being interviewed about the ‘progress’ being made. He actually said that he hoped that those involved would be able to put aside their personal feelings about this issue. I didn’t know that senators were supposed to make decisions for the country based on their personal feelings.

So I spent a bit of time doing research on the composition of the Senate. To augment the map above, here’s some of what I learned as well as some of what I already knew or suspected.

From senate.gov: The delegates who gathered in Philadelphia during the summer of 1787, first to revise the existing form of government and then to frame a new Constitution, debated the idea of a Congress made up of two houses. One house would be, in the words of Virginia’s George Mason, the “grand depository of the democratic principle of government.” To counter this popular influence in the national government, James Madison of Virginia proposed another house that would be small, deliberative, and independent from the larger, more democratic house. This became the Senate.

Also from senate.gov: “What is it that makes the Senate stand apart from other legislative bodies? Why have its seemingly arcane rules and traditions survived, and what purposes do they still serve?

“As a deliberative institution and a body of equals—among individual members and among states—the Senate has frustrated presidents, members of the House of Representatives, and even Senate leaders, who seek speedy enactment of legislation. There have been many efforts to modernize the Senate in order to meet new challenges. Yet despite more than 200 years of pressures to change, the Senate as an institution remains remarkably similar to the body created by the Constitutional Convention in 1787.”

So the fact that the population of Wyoming is 580,000 and the population of California is about 68 times more – 38,200,000 – doesn’t matter. Each state has equal participation in the Senate – 2 seats and only 2 seats. Or the fact that there are 44,500,000 more people in blue states than in red states doesn’t matter. Thus, the red states, with far fewer people, can have a majority in the Senate.

Overall, the red states are more rural than urban. The opposite is true of the blue states – more urban than rural. In the country as a whole, the rural population is about 14% (www.ers.usda.gov). Yet the Senate has 50 senators from red states. “Americans in rural areas typically favor more expansive gun access, while Americans in urban places prefer more restrictive policies.” (Pew Research Center)

Relearning the principles for the configuration of the Senate brought to mind my decades of work as an organizational effective consultant where my focus was on relationships and teams. In my experience, one of the most difficult outcomes to achieve is consensus. That’s mostly because it takes everyone to say yes and only one to say no. Strangely, the person who says no has the power. Thus, enters compromise. Compromise is where all parties agree to give something of their ideal away for the sake of achieving some kind of mutual outcome. In many cases, with compromise, nobody actually wins. But, perhaps, nobody loses either. We can hope.

What was new for me was people’s opinions of the Senate that I encountered when I was looking for a lead quote. So I leave you with a sampling of what I found.

When they call the roll in the Senate, the Senators do not know
whether to answer ‘Present’ or ‘Not guilty.’ ~ Theodore Roosevelt

About all I can say for the United States Senate is that
it opens with a prayer and closes with an investigation. ~ Will Rogers

It’s like going into the Senate. You know, the first time you get there, you’re all excited,
‘My God, how did I ever get here?’ Then, about six months later, you say,
‘How the hell did the rest of them get here?’ ~ Mike Gravel

If you’re hanging around with nothing to do and the zoo is closed, come over to the Senate.
You’ll get the same kind of feeling and you won’t have to pay. ~ Bob Dole

The Senate is the last primitive society in the world. We still worship
the elders of the tribe and honor the territorial imperative. ~ Eugene McCarthy

The Senate is a place filled with goodwill and good intentions, and if the road to hell
is paved with them, then it’s a pretty good detour. ~ Hubert H. Humphrey

Popularity should be no scale for the election of politicians.
If it would depend on popularity, Donald Duck and The Muppets
would take seats in the senate. ~ Orson Welles

I used to sit on the other end of Pennsylvania Avenue and wonder
why the Senate was always going into recess, until in my first year
I realized how intense the pressure was. ~ Hillary Clinton

When a member of the House moves over to the Senate,
he [or she] raises the IQ of both bodies. ~ Everett Dirksen

What’s going on in the Senate is kind of a politics of escalation.
We’re getting sort of like the Mideast: pay back everybody
when you’re in charge. ~ Lindsey Graham

Someday a political genius will come along
and make the Senate work. ~ Robert Caro