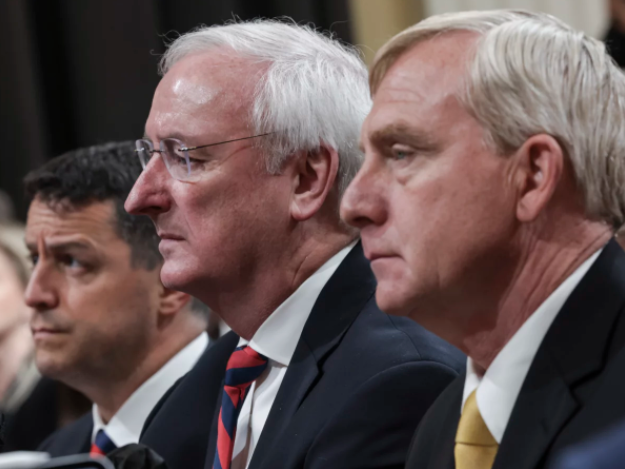 It’s been quite a week, huh? On one day, Friday, new gun legislation passed in the Senate. Albeit milquetoast as expected, the victory is that it is bipartisan. And The Supreme Court overturned Roe v Wade setting us back by generations. The Jan 6 Select Committee held their fourth and fifth hearings on Tuesday and Thursday.

All of these consequential events are well worth writing about because each will alter our present and future in some way. For now, though, I’ve chosen to focus on my observations and learnings from the hearings. Why? Because this is the set of events that most instills new hope in me.

“I’ve forgotten what Western it comes from, but the line stays fresh in my mind. As his ranch is being repossessed, a cowpoke laments, “It’s the Shawnee Cattle Company that’s takin’ it.’ Another rancher asks, ‘Who?’ The first replies, ‘Ain’t nobody. It’s a company.’

“The unprecedented and dramatic shift that took place in Eastern Europe in 1989 was about changing the agreements – and it occurred with little or no bloodshed. The fall of the Berlin Wall demonstrated what happens when legitimacy is removed from institutions and those who lead them. Everything can change when there is an unwillingness to keep old agreements coupled with a desire to create new ones. Though this example is political, the same principles apply to business.”

The example shows a positive outcome from changing the agreements. The opposite can also be true. Adam Kinzinger, who is on the select committee and who did a wonderful job as the lead questioner for the fifth hearing with DOJ leaders, was interviewed afterward. He used the image of guard rails on a highway to make a point. He said that Trump’s various attempts to stay in power – ranging from harassing election workers to trying to coerce state officials to bogus lawsuits to attempting to take over the Department of Justice and more – between the election and January 6 were like a car crashing into the guard rails. The rails were badly dented but they held. Then Kinzinger went on to say, “But this is not over. So the question is, Will the dented guard rails hold up again the next time?”

In addition to being more aware of the precarious state of our democracy, this is where my new hope comes in. I am humbled by and in awe of how many people – just in the two hearings – put their oath to the Constitution above doing what the then-POTUS wanted them to do. Just to mention some of them:

In their testimony on Thursday, the last three – representing the Department of Justice – said they were going to resign if Trump interfered with their roles. And not only that. They told Trump that if he replaced Rosen, which was his plan, not only would they and their leadership team resign but that it would cascade into hundreds of others throughout the organization also resigning. They had reached the point of ‘enough.’

The guard rails held because these people and many others kept their oath to the Constitution over caving to Trump’s intimidation and bullying. I’m sure it was very difficult at times. And, with the exception of Bill Barr, I had never heard of any of these people before. Given how all of them honored their oath, I wonder how many thousands of other government employees have done so as well. I know there probably are some who did not. But I’m betting that many more did than did not. And therein lies my hope. These quiet public servants and their colleagues are evidence that our republic may continue. I have always voted, even when I lived outside the US. I will continue to do so but with a new sense of purpose and with even more heartfelt gratitude than I had before.

I leave you with some words from historian, Howard Zinn:

“To be hopeful in bad times is not just foolishly romantic. It is based on the fact that human history is a history not only of cruelty, but also of compassion, sacrifice, courage, kindness. What we choose to emphasize in this complex history will determine our lives. If we see only the worst, it destroys our capacity to do something. If we remember those times and places – and there are so many – where people have behaved magnificently, this gives us the energy to act, and at least the possibility of sending this spinning top of a world in a different direction.

“And if we do act, in however small a way, we don’t have to wait for some grand utopian future. The future is an infinite succession of presents, and to live now as we think human beings should live, in defiance of all that is bad around us, is itself a marvelous victory.”