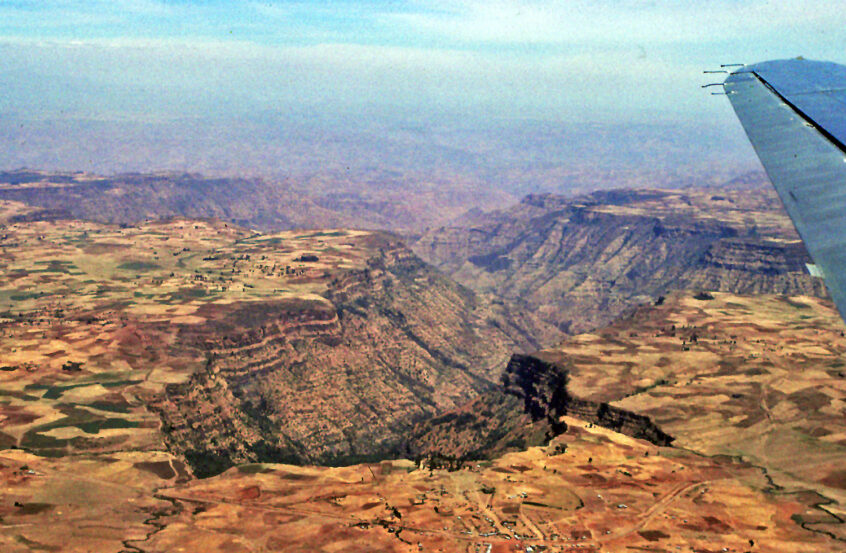 The Ethiopian landscape from the air shows why helicopters were the only means of getting food to some areas of the country.
.

Not At The Center Of The World’s Attention Any More

.
You pray for the hungry. Then you feed them. This is how prayer works.  ~ Pope Francis
.
There are genuinely sufficient resources in the world to ensure that no one,
nowhere, at no time, need go hungry.  ~ Ed Asner
.
Though quite a rarity at that moment, I went to Ethiopia as a tourist. I had a few days of R&R from my work in The Sudan and I wanted to personally see and understand more about the context of the people I was working with in The Sudan. I visited a food distribution site in northern Ethiopia.
.
The next year I was now actually working on a project in Ethiopia. Thus, I made a trip to Asmara, Ethiopia (later independent Eritrea), where I had a memorable and very informative meeting with a monk of the Ethiopian Catholic Church.
. 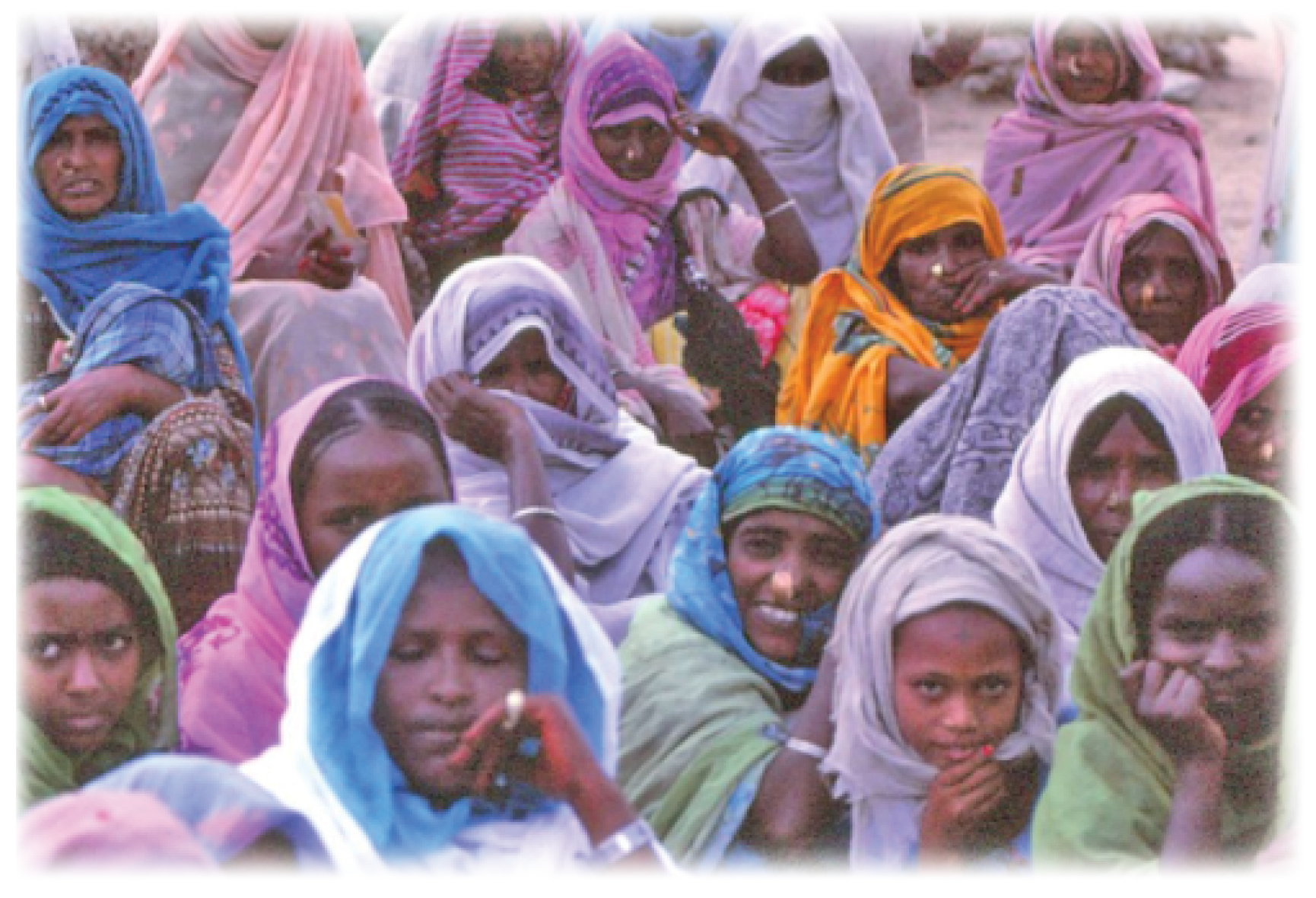 Women and girls waiting for their food.
Mothers and babies receiving their food. 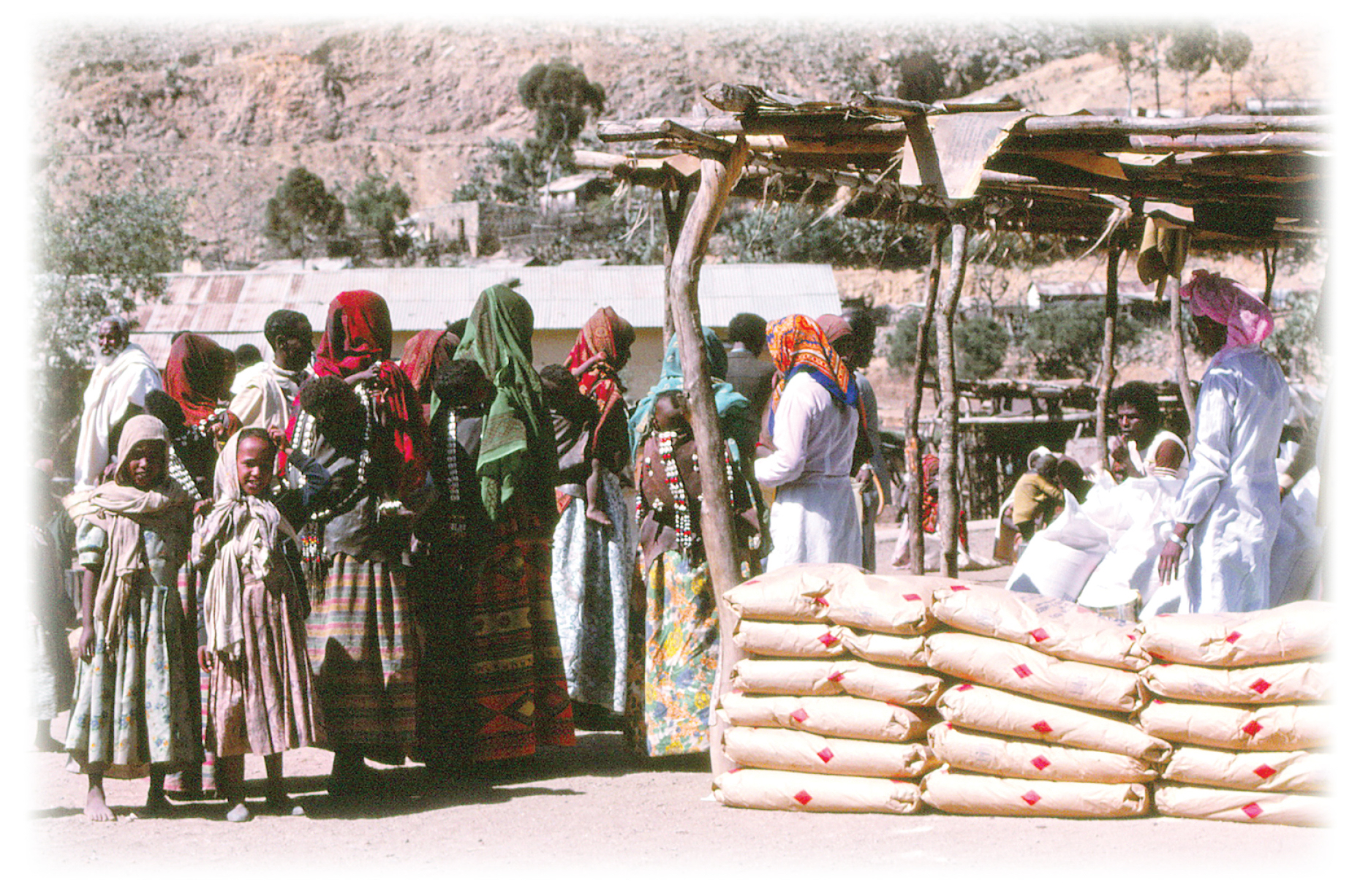 .From Addis Abba I flew to northern Ethiopia. The next day, I visited a food distribution center somewhere near Gondar, Ethiopia. Women walked up to 60 miles one way, most with babies one their backs, to receive food for a month. Then, of course, they had to carry the food and babies back home again. I remember thinking just what fortitude these women had. In spite of their arduous journey each month, the good news was that the food they received meant they could stay in their homes. They did not become displaced people living in relief camps inside Ethiopia. For now, at least.
.
Wheat and rice were two of the staples they received. I noted that because those staples were distributed to Ethiopian refugees in Somalia as well. A good amount of the rice made its way into the surrounding markets for two reasons. First, the primary grain for bread (injera) in Ethiopia is teff, Injera, not familiar to me, tastes like a sour, spongy pancake. Neither wheat or rice was familiar to them and many people did not like rice especially so, secondly, they traded it for lamp oil, candles, soap, and other essential commodities they otherwise would not have. Resourceful.
.
At the distribution site I watched as a mammoth British Hercules aircraft landed on a grass runway and the unloading process began. Some of the food would go to the women who were waiting and some would be loaded onto Polish helicopters to be flown to villages that were inaccessible by road. The rest would be stored in a warehouse at the distribution site.
.
It was February. Beginning in April the British Hercules would no longer be airlifting food to Ethiopia. However, the women would continue to come to receive and the Polish helicopters would continue to airlift food to villages as long as the stored food lasted. I was not aware that the airlift was ending when I visited. I would learn more the following year when I visited a monk in Asmara.
.

Unloading a truckload of grain into the warehouse. 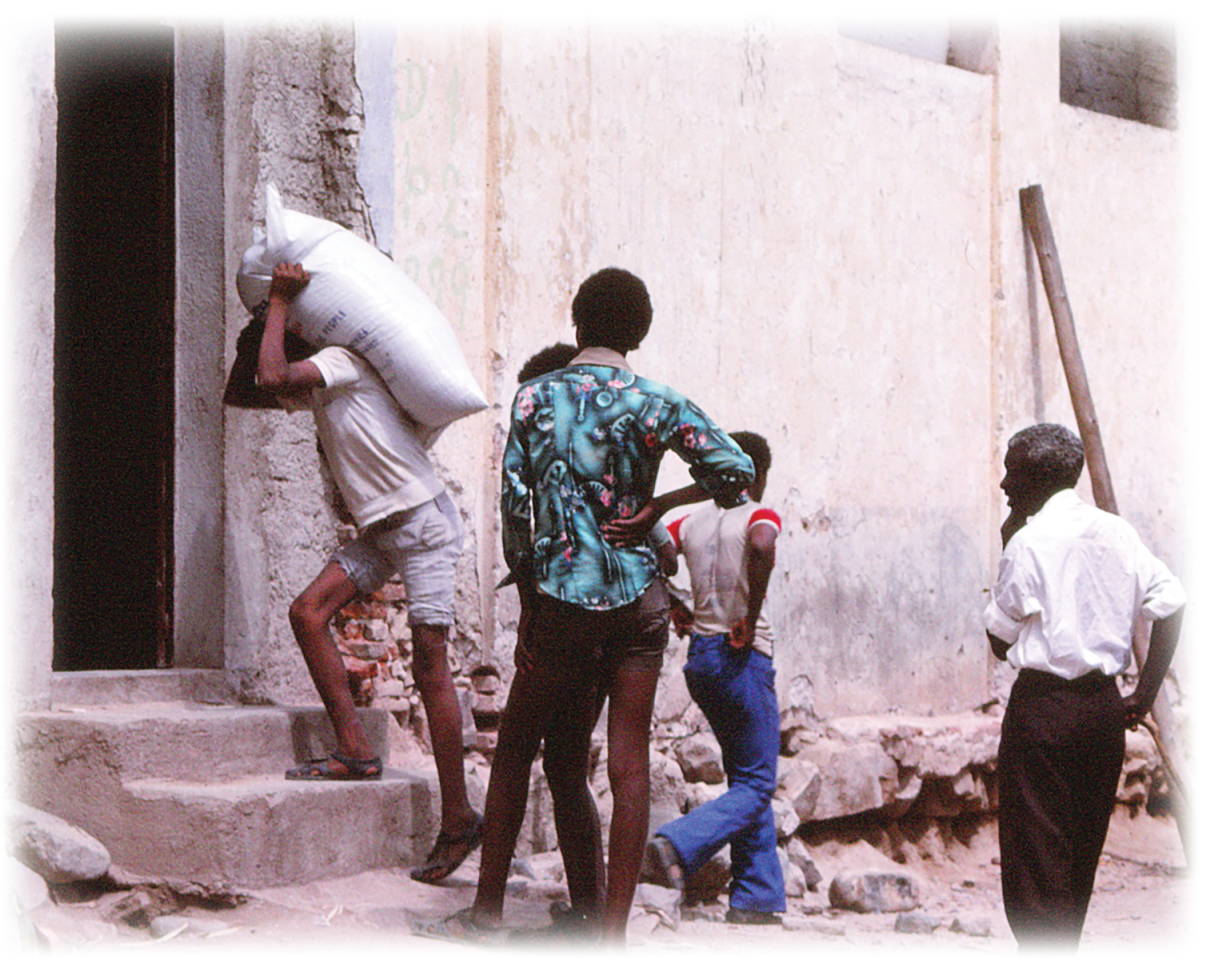 Almost to the day, a year after I had the experience of being at the center of the world’s media attention when I was working in The Sudan, I was now working in Ethiopia and I made a visit to Asmara, the capital of Eritrea. There I had an opposite experience from the buzz I felt when the media were in Khartoum. Now things, people, places felt empty. In fact, because of Eritrea’s fight for independence, the place WAS mostly empty. There were very few people on the streets. I saw no young men the whole time I was there. This part of the country was seriously at war. And, perhaps even more, the Ethiopian crisis was no longer at the center of the world’s attention. I felt both a personal and a collective sense of loneliness and loss.

I was spending a morning with a monk from the Ethiopian Catholic Church in Asmara. He managed food distribution for the Eritrea region. In his office there was a chalkboard with a grid drawn on it. Down the left side were the names of villages; across the top were the months of the year. The cells within the grid held numbers like 10,000 and 20,000 and 40,000. The brother explained, “This graph reflects the amount of food we distribute.”
.
It was February again. I noticed that from April onward many of the cells had a simple, stark “X” drawn through them. I asked the monk about this. He explained, “Beginning in April the Poles will take back the helicopters they have lent us. They need them for other purposes. The cells with an ‘X’ through them represent villages that can only be reached by air.”
.
I was breathless. “What will happen?” I asked. “Those people have no more food and no more ability to get food than they did before, do they?”
.
“No, they don’t,” he responded. “But the world’s attention has shifted. Many people think the drought and famine have passed.”
.
Yes, the world’s attention shifted but the drought, war, and, famine were still very real.
.
.
Every gun that is made, every warship launched, every rocket fired,
signifies a theft from those who hunger and are not fed,
~ Dwight D. Eisenhower
.
.
Photos by Barbara
Northern Ethiopia, 1985
Scans of 35mm slides